COVID-19: Edo locks out unvaccinated workers out of secretariat 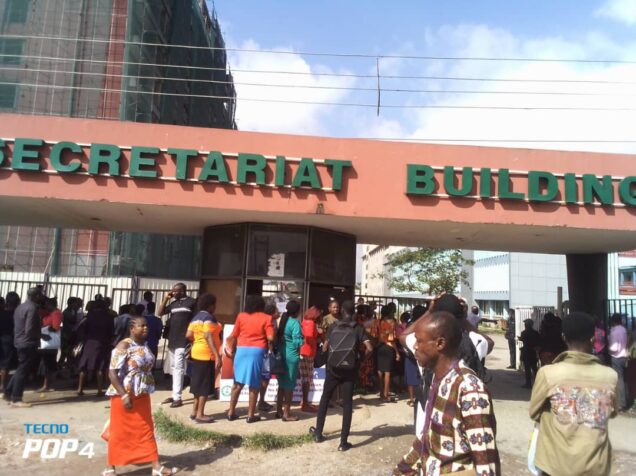 COVID-19: Edo locks out unvaccinated workers out of secretariat

Edo State Government on Wednesday locked out workers in its employ who did not provide proofs of having taken theCOVID-19 vaccines.

The government made good its threat on the enforcement of COVID-19 no-vaccination, no-entry to government facilities, by sending its workers home.

Hundreds of civil servants and others who had businesses at the State Secretariat, located along Sapele Road, were turned back over failure to produce proof of vaccination against the deadly disease.

Hundreds of civil servants and others who could not present their proof of COVID-19 vaccination were on Wednesday barred from access into the Edo State Secretariat.

Leading the enforcement was the head of the State COVID-19 Enforcement Team, Mr. Yusuf Harun, who was said to have manned the gate to the Secretariat, opposite the EFCC office in the GRA, as early as 7.00am.

Other officials of the team took charge of other entry points to the Secretariat.

It was gathered that the same exercise was carried out at Ministries and Departments located inside other government buildings around Ezoti Street and elsewhere.

Those who provided their vaccination cards were allowed entry, while others who could not were turned back.

The monitoring team also scanned the cards for genuineness, before being allowed into the Secretariat.

Some civil servants said they were taken by surprise and did not bring their cards with them, while those who had it in their offices had to send their colleagues to bring them to the gate before they were allowed in.

Commenting on government’s plan to sustain the enforcement, Haruna said: “What is important is that where there is will, there is a way. Governor Godwin Obaseki had demonstrated that the state wants to save lives by dishing out this directive.

“We expect little hitches at the take off but there will be improvement as we move on. I am also sure that the people will also want to see if the government is serious about the directive. And with what we started today (Wednesday), we are demonstrating that the government is ready to save lives in the state.

“I am sure that those who did not come with their vaccination cards today (Wednesday) and were sent back home to bring them will not do similar mistake tomorrow. It is clear that many of the workers have taken the vaccine but they are yet to get use to the practice of going about with their cards.

“With the media giving what we are doing here the necessary publicity, people will know the need to comply with the directive,” he added.

Many of the affected workers who refused to go home despite being refused entry, were seen loitering in groups around the perimeter fencing, discussing.

“I didn’t know that the order will take effect as I have not had electricity in my house for over one week. I have been vaccinated and I will be back with my card tomorrow,” one of the workers said.