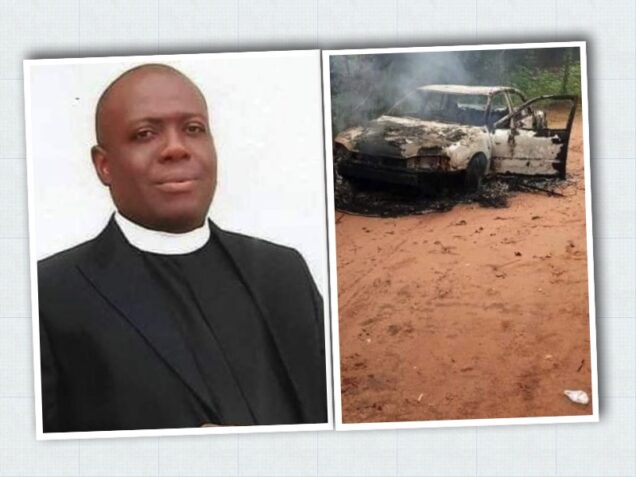 An Anglican priest in Imo state, Rev. Emeka Merenu was gruesomely murdered Tuesday, by gunmen believed to be members of the armed wing of the Indigenous People of Biafra, IPOB.

Merenu, the priest in charge of St Andrew’s Anglican Church in Ihitte-Ikwa, in the Orsu Local Government Area of Imo State, was shot and stabbed to death in the early hours of Tuesday.

The gunmen, suspected to be members of the Eastern Security Network (ESN drove into the church compound and entered the parsonage.

They killed the priest and set his car ablaze.

The assailants sprayed bullets in the air, witnesses said, as they sped away.

It was being speculated that the priest was killed because he allowed students to sit for their WASSCE (West African Senior School Certificate Examinations) at his parish school on Monday.

The speculation was being reinforced by a statement in July, credited to IPOB spokesman, Emma Powerful, in which he accused the Archbishop of Enugu, the Most Rev. Emmanuel Chukwuma of betraying the Biafran people.

The separatist group said the archbishop and powerful businessmen and traditional Igbo leaders had betrayed the cause of independence by their support of the Federal government.

The archbishop later denied his involvement in the abduction of IPOB leader, Nnamdi Kanu in Kenya.