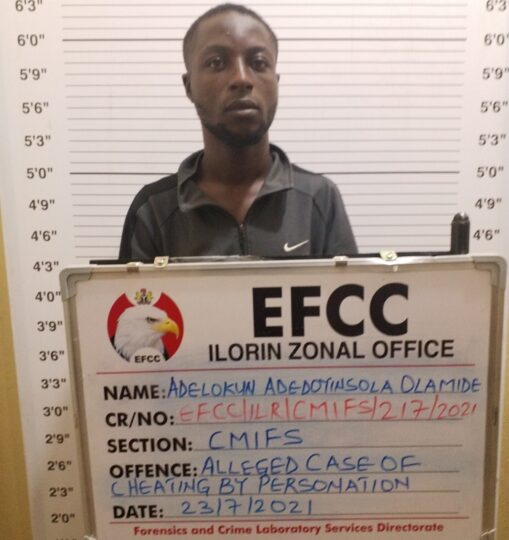 The EFCC has secured the conviction of three fraudsters for love scam. One of them is 24-year-old aluminium fabricator, Adelokun Adedoyinsola Olamide.

The others are Omotosho Kudus, 27 and one Arikewuyo Muhammed, 23.

The EFCC prosecuted the three convicts on separate charges before Justice Sikiru Oyinloye of the Kwara State High Court sitting in Ilorin.

They pleaded guilty to the charges.

Upon their pleas, counsel to the EFCC, Sesan Ola, drew the attention of the court to the plea bargain agreements entered by the defendants.

He urged the court to convict and sentence the defendants based on the agreement.

In his judgment on 14 September, Justice Oyinloye said the court had carefully considered the plea of guilt entered by the defendants.

The court, he said also considered the plea bargain agreement and all the uncontroverted exhibits tendered against them.

The judge said he believed that the prosecution had proved its case beyond a reasonable doubt.

The judge sentenced Adelokun to one-year imprisonment each on counts one and two, with the option of fine of N250,000 each on the two counts.

He ordered that the iPhone 11 which he used to perpetrate the crime be forfeited to the Federal Government.

Similarly, Justice Oyinloye sentenced Omotosho to one-year imprisonment each on counts one and two.

The judge ordered that Omotosho’s white Lexus ES 330 saloon car with registration number KWL346BF, which he acquired with the proceed of crime be forfeited to the Federal Government.

He was ordered to surrender an Apple Macbook Laptop, HP Laptop and iPhone11 pro used to perpetrate the crime.

The convict will also forfeit a manager’s cheque (bank draft) of N162,000, which he raised as restitution to his victims.

He will also forfeit the iPhone 11 which he used to perpetrate the crime to the Federal Government.