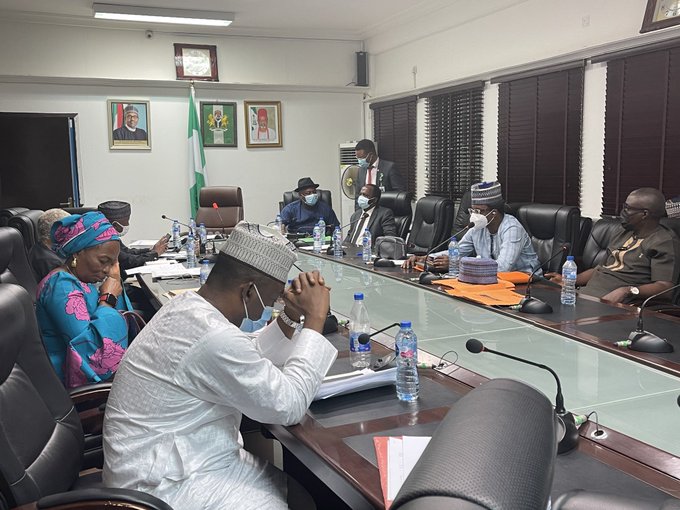 Doctors and FG officials at a meeting. Photo Festus Keyamo

The Federal Government and the Nigerian Medical Association (NMA) are to continue their negotiations next week, on the proposed new hazard allowance for doctors working in government owned hospitals.

The Minister of Labour and Employment, Sen. Chris Ngige stated this at a meeting of the Presidential Committee on Salaries with the leadership of NMA and its affiliates, on the review of the hazard allowance in the health sector.

This was conveyed in a statement signed by Mr Charles Akpan, Deputy Director, Press and Public Relations, in the ministry, on Wednesday, in Abuja.

The minister recalled that this discussion had begun with all the health workers since March, but along the line, the NMA disagreed on fundamental principles of negotiation with the Joint Health Sector Unions (JOHESU).

He noted that the president of the NMA requested that the discussion should be compartmentalised, which is allowed in any Collective Bargaining Agreement (CBA).

According to the minister, when people who are not doing the same work are negotiating an interest, if they decide to be separated, it can be done at the beginning or midway, but that will put a lot of load on the negotiator.

He, therefore, appealed to the NMA and JOHESU to sheath their swords, to enable the conclusion of the matter before the end of September.

“If we do so, it is to your own advantage because it has to be captured in the 2022 budget. Government will also look at its purse and if there is money, the President will sign and it will be a win-win situation for all of us.

“Last week, we discussed with JOHESU. We had a fruitful discussion. It is in that spirit that I am asking you that this should be fruitful, so that we can rest the issue of paying N5,000 hazard allowance.

”In 2020, it was not you who informed government. It was by our own volition that we invited both sides to the meeting where we handed over special COVID allowances to medical, dental workers and other allied health workers and we did it seamlessly.

‘I don’t know whether it was because of the fear of COVID that you worked together. Today, the divide is there. Having read the altercation between you and JOHESU, which is in the media, we can’t believe that both of you are managing one patient.

”We are appealing to you, let us unite and see how we can navigate this thing. This is COVID-19 period. Stop this dichotomy between you and JOHESU. Both of you are managing one patient. It is team work. Nobody can do it alone,” he said.

On the prolonged strike of the National Association of Resident Doctors (NARD), Ngige called on the striking resident doctors to note their insensitivity to the plight of Nigerians, by embarking on strike in the middle of a pandemic.

He maintained that the Federal Government had been religiously implementing its own part of the Memorandum of understanding (MOU) it signed with the NMA, but that rather than do their own part, the doctors have chosen to make the government the whipping dog.

Ngige noted that he had remained neutral as the conciliator, but that he would no longer allow the idea of unions whipping the government every time they come for negotiations, even when the government was trying its utmost best with the other side liable of not doing their own part.

He also said that timeframes had been fixed for actions to be taken, with those who are to take the actions spelt out.

On the issue of MEDSABAN and MDCAN raised by the NMA, Ngige said they had set up a committee, which had held its inaugural meeting, adding that even before their inaugural meeting, the government had placed all of them back on CONMESS.

”That is whether you are government or private sector. A court has ordered that these people should be placed back on CONMESS, pending when it concludes this suit.

“Again, we have a presidential committee on salaries and wages. We have put every wage on hold. There is a circular to that effect.

”So, we would have had a look at it before the amputation of people’s income in the emergency situation of COVID-19. Government is sensitive. I am sensitive to all these things,” he said.

He noted that in the same MOU, NMA was asked to work towards the withdrawal of the case filed by some doctors at the industrial court and prevail on the resident doctors to call off their strike, but both have not been done.

“The same goes with the Medical Residency Training Fund (MRTF). On this table, the budget office of the federation said we have N4.8 billion. Last time we paid N4.2 billion with skirmishes.

”We don’t want those skirmishes to recur. And they assured that their N4.8 billion is there and awaiting disbursement. We gave you an assignment with the CMDs and the Postgraduate Medical College to work and bring a genuine list.

”Postgraduate Medical has submitted a list of about 8,000 persons to the Ministry of Health and they discovered about 2,000 do not have registration numbers to say that they are registered doctors. So, the list was withdrawn and sent back to the college,” he said.

Ngige also said that the local ARD chapters were supposed to be helping to make that possible, especially the CMDs of teaching hospitals ought to supply names of residents there.

He added that most importantly, the Post graduate College should have a data base of your residents. Some of the names there are SMO 1, SMO 2, PMO 1 and PMO 2. Some have finished residency and gone out. Some are residents who have spent more than six years.

”According to the Act, they are supposed to exit. So, if you gather 8,000 of such people, why should government pay you? It happened in 2020. The problem is still there.

”Those who said they will return the money are not returning. The number is there. The Accountant General opened the account. So, you now sit down here and castigate government,” he said.

Also, the Secretary General of NMA, Dr Philip Ekpe, who called for prompt attention to resolve the anarchy in the health sector, also urged the ministry to explore the window opened by the intervention of President Muhammadu Buhari to see that all the negotiations were not in vain.