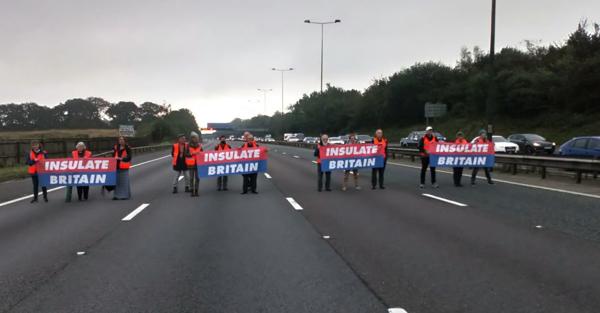 Climate protesters in Britain blocked the M25 London orbital motorway for the third time in a week on Friday, leading the Transport Secretary to demand “swift action” by police to clear the road.

Insulate Britain, the group behind the demonstrations, which was demanding government action on home insulation, claimed 79 people attempted to block the motorway hours after their release from police custody following similar protests earlier this week.

Transport Secretary Grant Shapps said: “This is dangerous and counterproductive.

“We all agree that climate change must be tackled, but this sort of behaviour achieves nothing, puts drivers at risk and increases pollution. I expect the police to take swift action to clear the roads.’’

Surrey Police said on Friday: “We were made aware of protesters at junction nine of the M25 earlier this morning.

“14 people have been arrested. We were also made aware shortly after 9 a.m. of protesters at junction one of the M3. We are on the scene and arrests are being made.’’

Home Secretary Priti Patel had already criticised the “selfish” protesters, some of whom had glued themselves to the road.

They stopped thousands of motorists at four junctions on Britain’s busiest motorway shortly after 8 a.m. on Wednesday for the second time in three days.

She said the “guerrilla tactics” used by the protesters “detract from their cause”, although insisting there will “always be space for legitimate groups to make their voices heard.

“This government will not stand by and allow a small minority of selfish protesters to cause significant disruptions to the lives and livelihoods of the hard-working majority.’’

Insulate Britain said its actions would continue until the government made meaningful commitments to insulate all of Britain’s 29 million leaky homes by 2030.