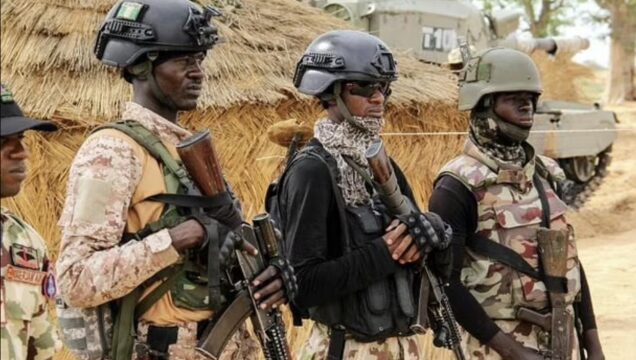 Islamic State West Africa Province (ISWAP) terrorists killed 16 Nigerian soldiers and two members of the civilian JTF in an ambush on their convoy on Wednesday.

The report by the AFP, which has not been confirmed by Nigerian military, said the soldiers, moving from Maiduguri to Monguno ran into roadside bombs planted by the terrorists.

The terrorists also attacked them with rockets.

ISWAP has claimed responsibility for the highway attack, claiming its forces killed 25 soldiers.

The assault was regarded as one of the deadliest on the army this year.

The attack comes several days after it was reported that ISWAP leader in Nigeria, Abu Musab Al-Barnawi had been killed.

According to the AFP report, the Jihadists detonated the roadside bombs, before opening fire with rocket-propelled grenades and heavy weaponry.

“Sixteen soldiers and two members of the Civilian JTF (militia) paid the supreme price in the attack while two soldiers were taken hostage by the terrorists,” one military officer said.

Eleven troops were also wounded in Wednesday’s attack in which several military vehicles were destroyed, said the officer who asked not to be identified as he was not authorised to speak to the media.

Another military source said the jihadists had detonated seven improvised explosive devices planted in the road as the convoy drove past.

He gave a similar casualty toll.

ISWAP on Wednesday claimed responsibility for the attack, saying its fighters killed 25 troops in an ambush on a convoy, according to SITE, which monitors jihadist activities.

Wednesday’s highway ambush was the most high-profile since ISWAP began consolidating its position in Nigeria’s northeast following the death of rival Boko Haram commander Abubakar Shekau in May.