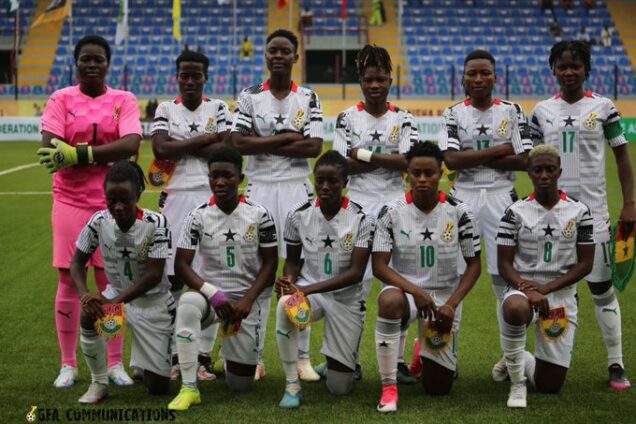 South Africa’s Bayana Bayana put up a sterling performance in the ongoing 2021 Aisha Buhari Cup at the Mobolaji Johnson Sports Arena, Lagos, on Friday, to triumph 3-0 over the Black Queens of Ghana.

A first half goal by Magana Hilda in the 18th minute after she tapped in with a header was all it took to prove Bayana Bayana’s superiority over Ghana.

South Africa continued to dominate proceedings in the game and did not allow any surge from the opposition as they proved hot in every department.

Their quick ball movement and fast pace kept the Ghanaians on the back foot throughout the first half of the game.

Bayana Bayana kept the momentum and could have scored more goals, but for Ghana’s back four who were made to work extra hard.

On the frontline, Ghanaian ladies were found wanting as the Bayana Bayana were more organised and mounted a formidable defence.

The second half began on a high tempo as the Black Queens did all they could to grab an equaliser, but Bayana Bayana’s tactical discipline gave them an edge as they frustrated the efforts.

KGatlana Thembi, upon receiving a pass from her striking partner, Magana Hilda, carefully dribbled past the defence of the Ghanaians, in a solo effort, to slot in Bayana Bayana’s second goal in the 53rd minute.

The South Africans piled on the pressure on their opponents to make them concede a corner kick that was beautifully converted by Holweni Sibulele’s 84th minute header, to put the game beyond the West Africans with a three-goal margin.

Desiree Ellise, the Bayana Bayana coach, told journalists at the press briefing after the game that she was very happy with the result as it showed the team’s capability to contend with big opposition.

She said the team managed the game properly and did not allow for any dominance from the Ghanaian team, expressing the hope that the team would build on the victory to continue to do well in subsequent games.

On her part, Bayana Bayana’s captain, Janine Van Wyk, said she was also happy for the opportunity offered by the tournament as it would go a long way to prepare the team for future games.

“We are aware of Ghana’s quality and that was why we came out very strong in the first half and did not allow for their dominance.

“We managed the game very well and at the end we took the game beyond them,’” she said.

The Ghanaian Coach, Mercy Tagoe, in her reactions, told journalists that she was not embarrassed by the final score line as a preparatory game, and she was okay with the result even though the team lost.

“It’s a loss and it is not the end of the world; as for me it was a preparatory game for bigger competitions.

“We are equally missing some players who could have affected the outcome of the game, but they are also playing elsewhere preparing for bigger competitions.

“So, I have to take the loss today and hope to do the necessary corrections in the future competitions like the African Championships Cup and the FIFA World Cup,” she said.