Brace up or be  blacklisted: Sanwo-Olu issues deadline to erring contractors 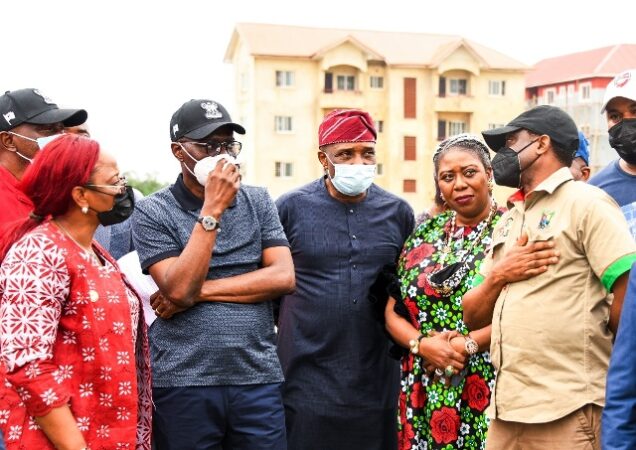 Sanwo-Olu during inspection of the Sangotedo House Scheme

Governor Babajide Sanwo-Olu on Friday vowed to blacklist contractors handling the phase two of the Sangotedo Housing project if they did not brace up for work within seven days.

The contractors were engaged by the Lagos State Government to handle the construction of 1,188-unit LagosHOMS in Sangotedo area of Eti Osa.

After defaulting previous deadlines, Governor Babajide Sanwo-Olu mandated the contractors to finish up the 744 flats being developed in Scheme 1 of the housing project by the end of next month (October).

The Governor inspected the housing project to assess the pace of construction work.

The project, sited on 16.9 hectares, took off in 2012. It was revived by the Sanwo-Olu administration. The first scheme of the project has 62 blocks of 12 flats each, while the second scheme has 32 blocks of 444 flats.

Sanwo-Olu, who was accompanied on the inspection by members of the State’s cabinet had a one-on-one engagement with the contractors during which he expressed his displeasure over the slow work on the project.

The Governor issued a stern warning to those culpable in defaulting the deadlines, saying he would no longer tolerate tardiness in the work. Erring contractors, the Governor threatened, would have their deals terminated should there be no progress in the next seven days.

He said: “We have come on an inspection of this massive construction site that is divided into two phases. The level of work on Phase One is over 90 percent, but this is not the same in the second phase. In the next six weeks, we will be handing over the 744 units in Phase 1 of the project and all contractors working on it must complete their work.

“I commend all contractors that have worked tirelessly to push through; I understand this has been a very difficult project. We have been working night and day, trying to deliver the project. We want to be fair to every contractor and we appreciate those who have shown real resilience and commitment.

“I use this opportunity to give a stern warning to erring contractors slowing down the project. It doesn’t matter who you know, I am not going to tolerate this tardiness any longer. I will give you one week to scale up work on the project. If there is no appreciable improvement, not only are we going to terminate those erring contracts, we will also prosecute them.”

The Governor pointed out that there was no reason for the contractors to delay the project and postpone deadlines, stressing that the State Government had fulfilled financial obligations in the contract.

Sanwo-Olu directed officials of the Ministry of Housing and Ministry of Works and Infrastructure to monitor the contractors and submit progress reports on the project. He said the report would determine whether the contractors would be considered again by the State Government for other projects.

Sanwo-Olu, at the meeting, called out the defaulters, and said: “I have not come here to turn you away, but to make peace and restitution. For those contractors still working, we will wait for another four more weeks for extensive clean-up before we finally commission the project.”

The Governor also set a nine-month deadline for the completion of the project’s Scheme Two, urging those handling the work to finish up before June, 2022.