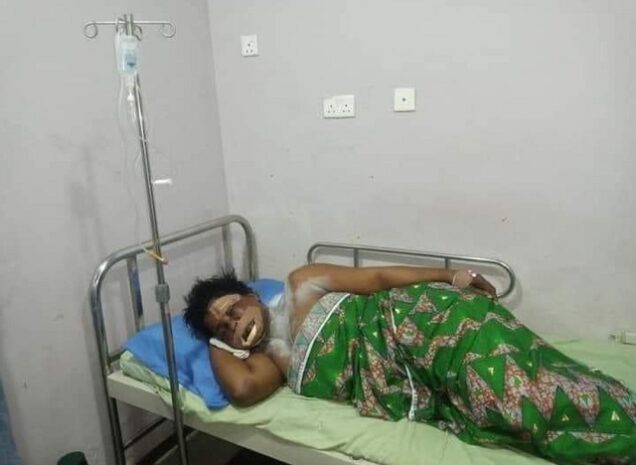 The victim on hospital bed

A woman whose identity still remains unknown is presently lying critically ill at a hospital in Delta State, after her son allegedly attacked her with a cutlass.

The incident occurred Tuesday, in Okuokoko town, in Okpe Local Government Area of the State.

Sources had it that the woman’s son, Emma Ere-Eganoma, who is now in police custody, invited his mother, a foodstuff seller at Okuokoko Market, to his home for undisclosed reason.

It was gathered immediately the woman entered into her son’s residence, the son locked the gate and attempted to butcher her with the weapon.

Another source disclosed that the suspect also attempted to pluck out his mother’s eyes, perhaps for ritual purpose, causing apprehension among residents of the densely populated Okpe community.

A source narrated: “The mother, on getting to the house, met her son in merry mood, with loud music playing from a stereo.

“After the arrival of the woman, the son immediately locked the entrance, brought out a matchete and used it on his mother.”

It was gathered that loud screams from the victim attracted residents from the neighbourhood who broke the suspect’s apartment door to rescue the woman who was already bleeding.

The woman was rushed to an undisclosed hospital in the area where she is now receiving treatment.

The residents also apprehended the suspect and handed him over to operatives of Okpe Police Division.

He said: “The boy is in custody, but we cannot ascertain if he was about using the mother for ritual because the mother is in the hospital.

“We are waiting for her to be discharged so she can tell us what happened. The boy said he was not using her for rituals. He just had some flimsy explanation, but we can’t come to a conclusion until we hear from the woman.”