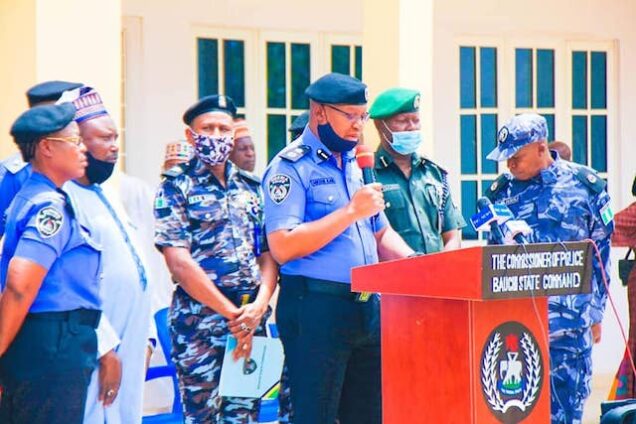 CP Sylvester Alabi briefs the media on the protest in Bauchi

The Police in Bauchi said that normalcy has been restored to the Bayara area of the metropolis.

This was after some protesters barricaded the Bauchi-Jos highway to protest alleged kidnappings and killings in the area.

The Commissioner of Police, Mr Sylvester Alabi, stated this at a press conference on Friday in Bauchi.

Alabi said that normalcy has been restored.

He said the people were protesting over a kidnapping case in the area.

“It is true that there was a mild protest by the residents of that area and we actually managed it.

“I sent the Area Commander Metro and the Divisional Police Officer (DPO), Yelwa to talk to them.

“The command is willing to collaborate with them to ensure that the culprits are found and arrested as well as rescue the kidnapped victims,” he said

Alabi said that the command received a report of a kidnapping case at Bayara area of the metropolis on Friday morning.

He said that information received by the police was sketchy, adding that the command would collaborate with the residents to arrest the culprits and rescue the victims.

“It is a case of kidnapping that happened very early this morning. Information about it is still sketchy, we don’t have a comprehensive report yet.

The CP further urged parents to ensure that their wards get better parental care and upbringing.

However, some of the residents said they were protesting over the kidnapping recorded in the past two weeks in the area.

Malam Isa Baba, one of the residents, alleged that unidentified gunmen stormed the area on Thursday morning and kidnapped a woman.

“The gunmen came to the area again this morning and kidnapped a woman. They came at about 1:00 am and got access to the house where the woman was kidnapped.

“This is what triggered the protest to block the road to express our feelings because the same incident happened two weeks ago,” he said.

Another resident, Abdullahi Ibrahim, alleged that three people were kidnapped and two others killed by unidentified gunmen in the past two weeks in the area.

“We want an urgent response from the police, we expect them to come to our aid, when we placed distress calls they dont respond.

“We also call on the state government to take action and help us, we no longer feel safe or secure even in our homes,” he said.