Why Kumuyi deserved to be celebrated - Osinbajo, Sanwo-Olu 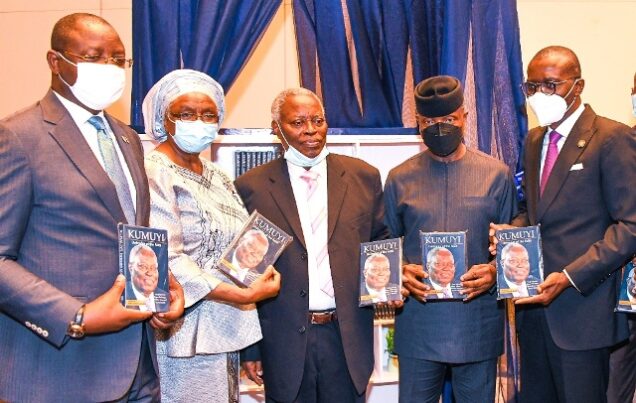 Nigeria’s Vice President, Prof. Yemi Osinbajo and the Governor of Lagos State, Babajide Sanwo-Olu on Monday said the General Superintendent, Deeper Christian Life Ministry, Pastor William Kumuyi deserved to be celebrated because he has mentored millions of Nigerians to toll the part of righteousness.

They spoke at the launch of the biography of the revered man of God, titled: “Kumuyi: Defender of the Faith,” held at the Eko Hotel and Suites, Victoria Island, Lagos on Friday.

He said the little difficulty encountered in persuading him to allow his biography to be written was as a result of his humility, wanting God to have all the glory.

“Another side to the issue is that everybody owes society three taxes, which are income tax, social tax and civic tax. For preachers of the gospel, there is a fourth tax, which is Pentecost tax. The saints before us were beneficiaries of this, their stories continued today and the baton has been handed to us, we must all pay this Pentecost tax,” he said.

Osinbajo stated that the book of Kumuyi: Defender of the Faith,  just began the work of discharging the Pentecostal tax, by documenting his life and achievement for people still living and those coming after to read and be enlightened.

Speaking, Sanwo-Olu said earlier in the year, he was privileged to attend the 80th birthday of Kumuyi, saying that he had been a teacher and a mentor to millions.

“He is a family man, a philanthropist, a lover of Jesus. Like they said, he found it hard to approve the writing of the book because of what he stood for about the gospel of Christ. You are an epitome of simplicity and what Christ stood for. This story needs to be told in full.

“This book is not only apt but set aside a very promising carrier in ivory tower, a divinely orchestration of teaching the word of God.

“He made a choice from solving mathematical problems to solving age long human problems. His church is one of the most respected spiritual institutions in the world. Holiness has been the key to his ministry and to place God over and above everything else. We thank God for your life and ministry,” he eulogised Kumuyi.

The keynote speaker, Prof. Dapo Asaju, former Vice Chancellor, Ajayi Crowther University, who spoke on “Imperative of Integrity, Transparency and Trust in Leadership, celebrating the life of Kumuyi, the Defender of the Faith,” lamented that in Africa the biographies of people’s exploit were not always documented.

“In this clime, not many people celebrate biography. Biography makes us to learn after people have gone. Great men have passed through this journey. Integrity, transparency and trust are ingredients for good leadership. When these virtues are lost, it is finished for the society unless God intervenes.

“Especially in Nigeria, most people have lost faith in government because of corruption, insecurity, banditry, etc. We pray for the good old days,” he said.

Asaju decried that the churches were no longer impacting on lives, while brain drain had been the order of the day, adding that Nigerians at the lower level were more corrupt than those at the top.

“The young people are not ready to work, they want to get rich quick. Where was the church when the youths exploded? We need to go back to the fundamentals of integrity,” he said.

The Book reviewer, former Vice Chancellor of Caleb University, Prof. Ayodeji Olukotun said the book comprised 336 pages and 14 chapters, as the book detailed the upbringing of Kumuyi and his ministry.

Minister of Youth and Sports, Sunday Dare, said Kumuyi remained a defender and a soldier for Christ.

Chairman, Editorial Board of the Book,Pastor Philip Oluwi said the book project was conceived in October 2020, with work on the book commencing in November.

He said the team was apprehensive about a project that sought to draw Kumuyi’s attention to the world rather than Jesus.

“We were convinced that it was a project that needed to be done and we continued. We were relieved that few months later, he gave his approval,” he said.

Speaking at the event, Kumuyi said he did not know about the book originally, but that the team approached him to intimate him of what they were doing and that he gave his blessings.

“I didn’t know about the writing and publication of the book originally, but the authors and contributors approached and told me that this was being done, and I sat back and thought about it and said it’s alright, we can go ahead.

“Actually, I never knew that the words The Defender of the Faith were part of my name and calling,” he said.

He said he got to know about the meaning of ‘William’  for the first time in Singapore many years ago when he was told that it meant ‘Defender of the faith.”

Kumuyi said he had always wanted to be called Johnson but that the Anglican minister gave him the name ‘William.’

He explained that he had been conscious of God’s presence in his life as far back as 1952 and that he got converted in 1964 after hearing the gospel.

“Eventually, I moved forward, reading books and someone, Reverend Mellor of Methodist Church handed over to me the writings of John Wesley and I began to read and read, and I consecrated myself because I saw how John Wesley went all over England and Europe, defending the faith, even though I didn’t know the meaning of my name William then,”he said.

Kumuyi said God has used his ministry to bless the lives of people with miracles across the world, saying that his prayer “this morning is I want to be like Jesus. I want to raise up people that will go beyond me in Christianity.”