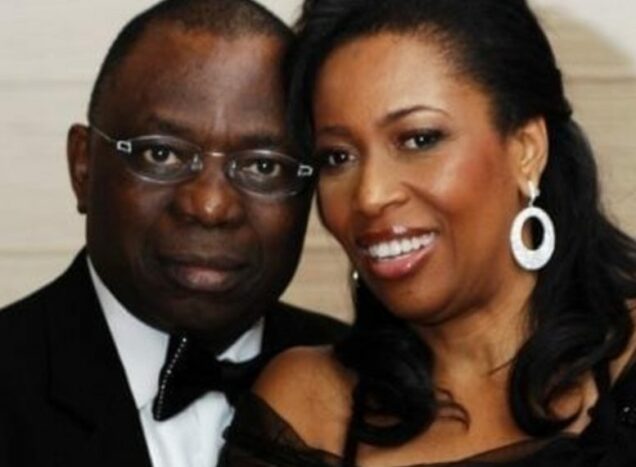 Sequel to an order obtained by Prest in respect of the Estate of the deceased against the wife of the deceased  Oluwayemisi Ajayi, the widow has filed an application before the Federal High Court in Lagos, urging the court to set aside the order obtained by Prest and her daughter, Tomisin Ajayi, granting them leave to institute the pending action and restraining Oluwayemisi Ajayi from running First Foundation Medical Engineering Company Limited, the company in which she and her husband are the only shareholders.

She contended that the order is a nullity on the ground of fundamental irregularity, lack of jurisdiction and denial of fair hearing.

The 1st to 4th Respondents/Applicants in the suit are First Foundation Medical Engineering Company Ltd, Registrar-General of the Corporate Affairs Commission (CAC); Mrs Oluwayemisi Ajayi and a lawyer, Mr Patrick Abak and the 1st, 3rd and 4th Respondents are being represented by Mr. Kunle Adegoke SAN.

However, the respondents have also filed a counter-affidavit to the originating motion stating their reactions in addition to an application to set aside the order of court granted on 5th August, 2021.

In an affidavit sworn to by a legal practitioner Afeez Ishola Soliu of Kunle Adegoke & Co., the deponent averred that on the 9th day of September, 2021, upon conducting a search of the Court’s file in respect of this suit, to their greatest dismay, they discovered that the matter had come up on two occasions, without service of hearing notice of the proceedings on the respondents, but that ruling had also been delivered in respect of the originating summons by which the Plaintiffs sought orders to restrain the Respondents.

Soliu said due to the apparent deliberate suppression of facts and glaring act of bad faith on the part of the Plaintiffs, the court was misled to entertain the proceeding of 2nd of September, 2021 under the belief that the respondents had notice of the said proceedings.

He said no form of hearing notice whatsoever, whether emanating from the court or from the applicants, was served on their counsel or even on the respondents.

The respondents contended that failure to serve hearing notice is a breach of fundamental principle of fair hearing and that as at the 7th day of September 2021 when the originating summons dated 23rd July, 2021 was heard and determined, the respondents were still within time to respond to the allegations of the Plaintiffs, but were denied the right to respond to the said originating summons.

Soliu said by virtue of the foregoing, the proceeding of the court conducted without issuance of hearing notice to the respondents were liable to be set aside, and that onsequently, the three respondents comprising First Medical Engineering Company Limited,  Mrs Oluwayemisi Ajayi and Patrick Aback were urging the court to set aside the entire proceedings of the court conducted on the 2nd and 7th days of September 2021 for being a nullity on grounds of fundamental irregularity, lack of jurisdiction and denial of fair hearing.

He said they also sought an order compelling the plaintiffs, Mrs Hellen Prest Ajayi and her daughter Miss Tomisin Ajayi to effect payment, to the three respondents in respect of the undertaking made pursuant to which the plaintiffs interlocutory prayers were granted by the court, the said order being liable to be set aside.

However, in a counter-affidavit sworn to by Mrs Oluwayemisi Ajayi and filed before the court by Barrister Kunle Adegoke SAN against the originating motion which is the substantive suit, Mrs Ajayi stated that she was aware that Miss Tomisin presented herself as the love child of an adulterous relationship between her deceased husband, Dr Tosin Ajayi and his adulteress, Ms Helen Prest.

She said that at no time did her deceased husband and her terminated their marriage as their marriage was always extant and never dissolved till he died.

She said her late husband, Dr Ademola Oluwatosin Ajayi, and her were married under the Marriage Act on 6th day of July, 1974 and that the marriage was celebrated at the Divisional Office Ijebu-Ode and that the second plaintiff in this suit, Ms Helen Prest was her husband’s adulteress who, despite knowing that her deceased husband was always a married man, continued to have an illicit relationship with him as a concubine.

To buttress this point, Mrs. Oluwayemisi Ajayi attached to her response a handwritten note written by Ms Helen Prest sometimes in 1998 wherein she admitted to being aware that her late husband and her were still married and not divorced.

She said it was in pursuance of this illicit affair that Ms. Helen Prest presented Tomisin as the love child of their affair.

Mrs. Ajayi stated in her affidavit that Helen Prest was never in any legally cognizable relationship with her deceased husband as he was always married to her at every point in time.

She admitted that Helen was her deceased husband’s concubine but never a shareholder of their company First Foundation Medical Engineering Company Limited, but a mere meddlesome interloper with no legally cognizable relationship with the company, therefore she had no reason whatsoever to act prejudicially or oppressively to the plaintiffs who as a matter of fact were strangers to the company.

She contended further that the Plaintiffs had no right to institute the action as they are not shareholders of the company. To demonstrate her good faith, she deposed in her affidavit that she caused her lawyers to write to Tomisin Ajayi to join her children’s application to obtain Letters of Administration for their deceased father but Tomisin replied through her lawyer that she did not want to have anything to do with her and her children.

She contended that the plaintiffs were on a mission rooted in corporate robbery sought to be carried out in the garment of the law and that the instant suit, together with the application for injunction, was frivolous, vexatious and without any basis.

Consequently, she said in the interest of justice, she contended that the reliefs sought by Helen Prest in the originating motion for 50% of her husband’s estate, should be refused.

No date has been fixed for further hearing.