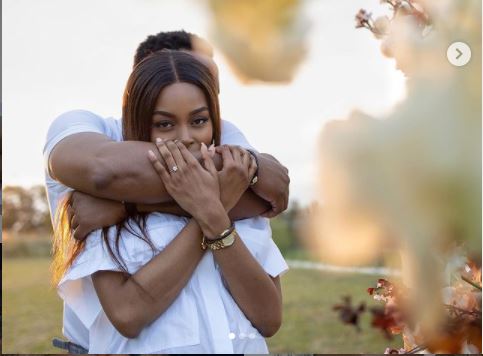 The media girl on Saturday took to Instagram to share a cute loved-up picture of herself and her fiancé while flaunting her engagement ring.

She captioned her post: “I said ‘YES’ to my best friend!🤍
–
I remember my fiancé saying this:

“Someday when you want to, and you feel my vibe, I will show you how a queen is meant to be treated…” this was before we even started dating and I didn’t want to give him time of day.

You’ve done exactly that from the day 1.
I’m still in awe…
This is really a love like no other, nothing I ever imagined to happen to me.
A God thing.
I prayed for you.
I love you so much baby!
So excited for our future.”

She obtained a BA degree in Brand Building and Management at Vega Bordeaux School, which she dedicated to her late mom, Margerette Noinyane who died in 2012.

She has worked with the likes of Hlomla Dandala, Larona Moagi, Moshidi Motshegwa and Lunga Shabalala.

She also worked on the telenovela, The River, which aired on 1Magic.

She is also a brand creative strategist and global citizen advocate