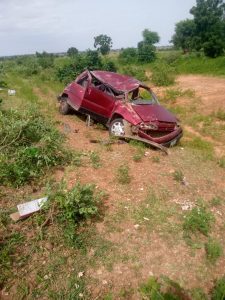 Corp Commander Yusuf Abdullahi, Sector Commander, FRSC , who disclosed this to the News Agency of Nigeria (NAN) in Bauchi, said the accident occurred around 2:40pm on Friday.

He said the car with registration number, BAU569AA, wrongfully overtook another vehicle, leading to loss of control of the car by the driver and the crash.

Abdullahi revealed that a total sum of N21,000 was recovered from the scene of the accident.

“The name of the driver is Moses Kefas and there were four people in the car, three male and one female.

“Among the deceased were two male and a female, with one male injured. I was made to understand that they are residents of Rafin Zurfi area of Bauchi metropolis.

“From the information we got, they were traveling out of Bauchi for a promotion activity when the unfortunate incident occurred,” the commander said.

The FRSC boss further explained that both the deceased and the injured had been taken to Darazo General Hospital for medical attention and confirmation.

He advised all road users to always be conscious of traffic rules and regulations to avoid unnecessary crashes that would lead to loss of lives.