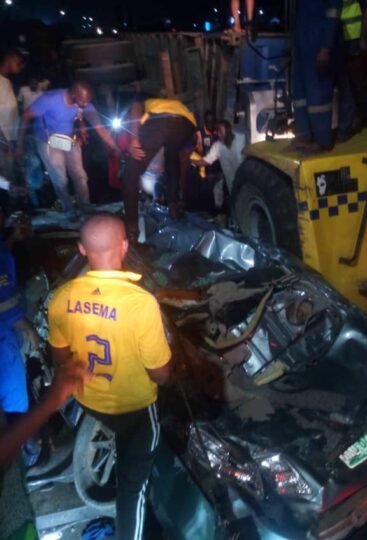 Four persons have cheated death in Surulere area of Lagos, Southwest Nigeria as fallen-container crushed the vehicle they were in.

He said the agency immediately activated its response plan and moved to the scene of the incident.

“The agency activated its response plan to the scene and upon arrival at the scene of the incident, discovered a 40 feet containerized truck had fallen sideways onto a Toyota car with four (4) people trapped inside the vehicle.

“The quick response of the Agency’s response team culminated in the successful extrication of two of the people inside the car.

“The third and fourth victims have been rescued alive from the car and are receiving pre-hospital care from the Agency’s paramedic team,” he said.