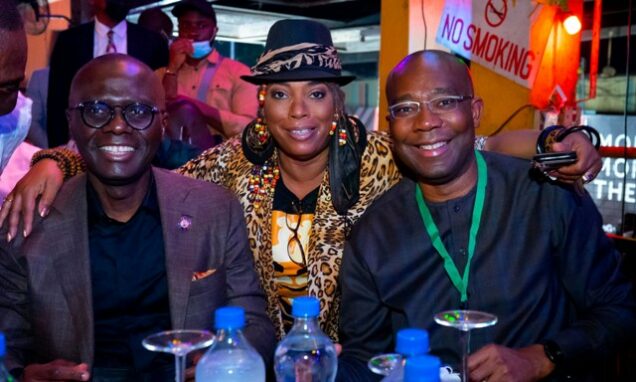 Lagos State Governor, Babajide Sanwo-Olu at the weekend disclosed that the state has administered 230,000 first shots of Moderna COVID-19 vaccines on residents.

Sanwo-Olu gave detailed explanation on how the State Government had expanded access to vaccines since the vaccination programme began in March and the State’s projection to protect its residents and environment.

The Governor spoke at the 2021 Global Citizen Live Concert held at Fela’s Afrika Shrine in Ikeja. Audiences in 11 cities across the world, including Paris, Seoul, London, Sidney, New York and Los Angeles, witnessed the live event held in honour of frontline and essential workers in the battle against the global pandemic.

Global Citizen Live is a 24-hour global event initiated in six continents to unite the world in defending the planet against diseases and defeating poverty.

A-list Nigerian musical artistes that performed live during the international concert included Femi Kuti, Davido, Tiwa Savage and Made Kuti, among others.

As the epicentre of the pandemic outbreak, Sanwo-Olu said Lagos had pursued a radical vaccination programmes, which led to the administration of 16,000 jabs of vaccines daily. This, the Governor said, is a far cry from what was projected in achieving herd immunity.

Sanwo-Olu disclosed that 405,000 residents had received first doses of AstraZeneca, while 289,000 persons returned for their second doses. The State, he said, administered 230,000 first shots of Moderna to raise the vaccinated population to about 1.2 per cent within five months.

He said: “Our vaccination rate is far below the minimum target of 60 per cent recommended by the World Health Organisation (W.H.O) per city population. At the current rate, it would take about three years to achieve our herd immunity target. We cannot continue at this speed if we seriously want to beat this virus.

“To safely achieve herd immunity against COVID-19, a substantial proportion of our population would need to be vaccinated to lower the overall amount of virus able to spread in the whole population. One of the objectives of attaining herd immunity is to prevent mutations from emerging leading to more aggressive strains. It is important that Lagos achieves herd immunity at the same time with all countries together.”

Sanwo-Olu noted the situation of unequal distribution of vaccines in which richer nations secured more doses than the size of their populations and are preparing to roll out booster shots, while poorer countries struggled to administer first doses, threatening the global efforts to end the pandemic.

He said vaccine equity remained the only path to toe by world leaders to end the pandemic. To do this, the governor said the world must ensure that vaccines were available to all, especially poorer countries that had struggled with supply.

On how Lagos is creating access and ramping up vaccination, Sanwo-Olu said the government was leveraging the private sector funding, capacity and infrastructure to scale up availability and distribution.

“Given the fact that we expect COVID-19 vaccinations to be annual going forward, this is the only sustainable path towards achieving herd immunity and making Lagos free of the virus. With our approach, we expect to vaccinate 30 per cent of the population of Lagos within one year. This will put us on a better and more sustainable path towards herd immunity. We expect COVID-19 vaccinations to be an annual programme, going forward, as this is the only way to making Lagos free of the virus.”

The Governor urged Nigerians to continue to be law-abiding and comply with the travel guidelines stipulated by the Presidential Steering Committee to prevent the importation of new variants. He reiterated that observation of social distancing and personal hygiene would break the cycle of community transmission of the virus