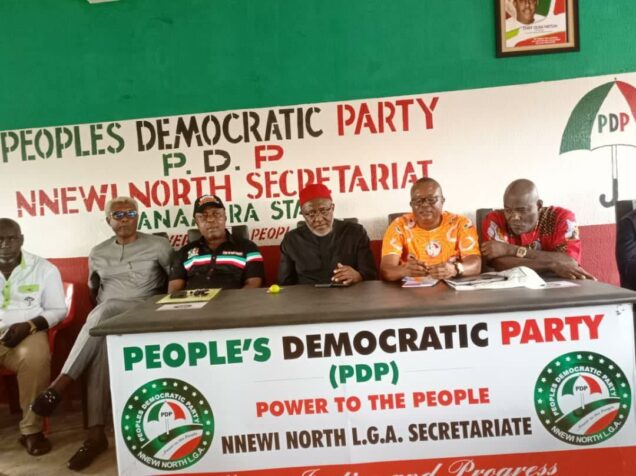 Metuh donated the office complex to the Nnewi North chapter of the party.

While commissioning the complex on Saturday, Metuh  noted that all hands must be on deck to provide political solutions to the plight of Ndi Igbo to ensure peace and security in the zone.

He also called for political solution to the travails faced by embattled Independent People of Biafra (IPOB) leader, Nnamdi Kanu.

Metuh expressed support for South East National Assembly Caucus and its initiatives to provide solutions on matters related to Nnamdi Kanu and the restiveness in the region.

“I, Chief Olisa Metuh am here to give my 100% support to the South East National Assembly Caucus on its initiatives to provide a political solution to the arrest of Mazi Nnamdi Kanu and the situations that constitute unrest in South East Nigeria.

“I call on the southeast governors’ forum to join in providing political solutions to the plight of Ndi Igbo so as to ensure a peaceful zone for our people. Nnamdi Kanu is an Igbo man and our son, He has not stolen before nor has he killed anyone before and hence we must stand for him as our son”, Metuh stated.

Metuh also called on Igbo youths at the event to restrain from acts of destruction as well as review the incessant sit-at-home orders, noting that such is crippling the southeast as well as shutting down the economy and local enterprise in the area.

The Chairman, PDP Nnewi North Hon. Nonso Amachukwu who opened the event thanked Olisa Metuh,  for bringing an end to their many years of rents.