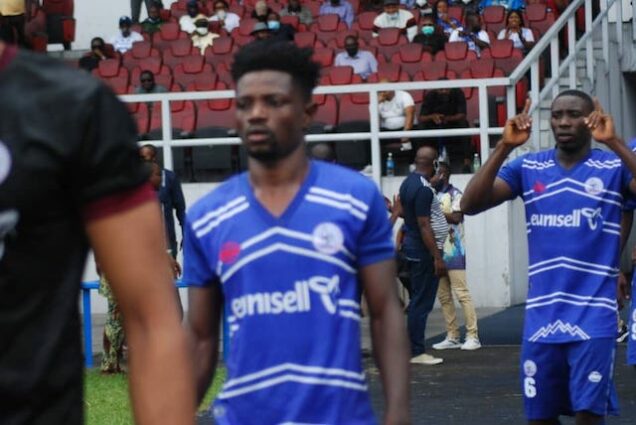 Rivers United players after beating the Tanzanian team on Sunday

Rivers United FC of Nigeria, on Sunday, completed a double victory over Young Africans of Tanzania, to earn a place in the first round of the CAF TotalEnergies Champions’ League.

United defeated the visiting team 1-0 at the Adokiye Amiesimaka Stadium in Port Harcourt.

Technical Adviser of Rivers United, Stanley Eguma, after the CAF Champions 2nd leg preliminary round tie game, said that it was a hard earned victory.

Eguma commended his players for the good effort they put in the game and also thanked God that the team was able to secure victory.

“We beat them away, and everyone thought it was a push over, but it was very obvious here that they are a very strong team.

“But after the away game, I knew that the second leg will be very tough, and it was the reason we came back here to re-strategise.

“Our initial plan in the first half didn’t work, so we had to change strategy in the second half, when we discovered that they were playing more offensive.

“We have to seize the ball from them and had more ball possession before we were able to pierce their defence and get the lone goal in the 82nd minute,” he said.

The Rivers United technical adviser stated that some of his key players were missing from the game because of the antics of their opponents.

The 82nd minute strike from Uche Onwuasonaya gave Rivers United a 1-0 win to progress 2-0 on aggregate.

Rivers United held a slim 1-0 advantage after the first leg encounter in Dar es Salam, but having won the first round ticket, would now face Sudanese giants, Al-Hilal.