Runsewe honoured with China Man of the Year award 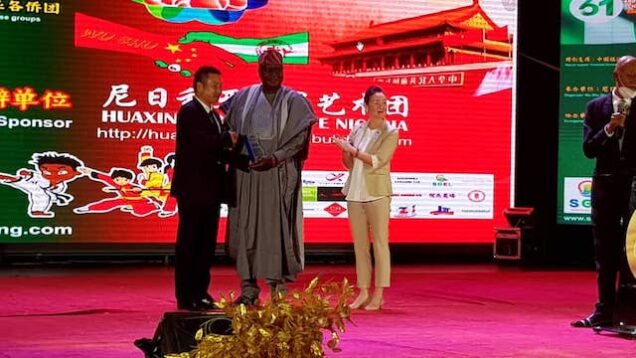 Otunba Olusegun Runsewe, Director-General, National Council for Arts and Culture (NCAC) was on Saturday honoured with the China man of the year award.

The event was organised by Hauxing Arts Troupe in Nigeria, the Chinese community, the consulate and the WUSHU Development Association of Nigeria.

Dr Matthew Uwaekwe, Coordinator, Nigeria-China Business Council said that Runsewe emerged the China man of the year after a voting session within the Chinese consulate.

Uwaekwe said that members of the Chinese community in Nigeria were elated at the pace and passion at which Runsewe brought to bear in his assignment as Nigeria culture chief.

He said that Runsewe had worked tirelessly to build a strong cultural tourism relationship between Nigeria and China.

He said that Runsewe had in various ways, convinced the world that Nigerian culture in its diversity had the capacity to foster unity and peace among the people of both countries and the world.

“Otunba Olusegun Runsewe has done well for the country, he has the vision to promote the cultural relations between China and Nigeria, and we, therefore, confer on him China man of the year award.

“He has emerged the China man of the year after a voting session within the Chinese consulate, so this award is from the Chinese community,” he said.

Runsewe expressed NCAC’s commitment to continue serving as a catalyst for consolidating and sustaining China and Nigeria’s Bilateral business, cultural and diplomatic relations for years to come.

He said that the relationship between NCAC and the Chinese community was simply a true reflection of the overall bilateral relations Nigeria and China had in all facets of economy and life.

He noted that this was due to both countries’ shared similarities with regards to their strategic positioning in their respective continents; their political and economic influence; as well as population strength.

According to him, these factors foster mutually beneficial opportunities for sharing, understanding, and exchanging cultural affinities among the two countries.

“Today, we are once again gathered in continuance of this tradition to renew and rejuvenate the bonds of this strategic partnership, which has continued to wax stronger over the past half a century.

“I assure you of the NCAC commitment toward serving as a catalyst for consolidating and sustaining China-Nigeria bilateral business, cultural and diplomatic relations for many more years to come.

“It is with great pleasure that I felicitate with you on this annual commemoration of the mid-autumn festival & national day celebration as well as the novel and commendable occasion of Nigeria first SGEL Cup Chinese Wushu Championship final performance and award night.

“In the same vein, I thank you for the honour to sit as Chairman of this event and the award conferred on me.

“This gesture is indicative of the harmonious relationship between the National Council of Arts and Culture (NCAC) and the Chinese Diplomatic, Business and Cultural Community in Nigeria.

“This has continued to flourish under my leadership as Director-General of the NCAC; President, World Crafts Council (African Region) ; as well as Chairman, Africa-China Culture and Arts Exchange Society,” he said.

Runsewe recognised the entire Chinese community in Nigeria for their laudable contributions and commendable interventions.

He appreciated the organisers for the scholarships extended to schools and students as this will enhance access to education and learning in Nigeria.

“Most significantly are those engagements and exchanges being implemented by the Chinese community which impacts directly on the core mandate of my Agency.

“These include SGEL Cup Chinese Wushu Championship Final Performance, which is first of its kind in Nigeria. We look forward to sustaining such programmes, activities and initiatives in the future,” he said.

He congratulated the Chinese Consulate in Nigeria, the Nigeria-China Business Council, and the entire Chinese Community in Nigeria as they commemorate the auspicious event