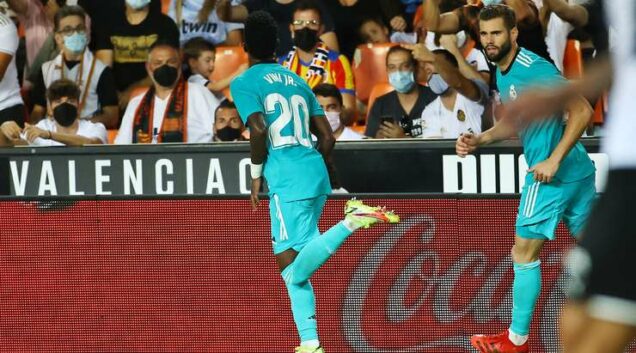 Vinicius celebrates his goal for Madrid

Vinícius Junior scored a late goal and set up another as Real Madrid came from behind to steal show at Valencia on Saturday.

After a goalless first half, Valencia opened scoring on 66 minutes through Hugo Duro, a former Madrid player.

Madrid was heading for defeat when Vinicius equalised on 86 minutes of play.

Karim Benzema had played the ball to Vinicius Junior, whose deflected shot from inside the box went past the helpless Giorgi Mamardashvili.

Two minutes later, Karim Benzema broke the heart of Valencia with the second goal after an assist from Vinicius.

Vinicius played a neat lofted pass into the box for Benzema, who beats the defender in the air and planted a header into the left side of the goal from close range.