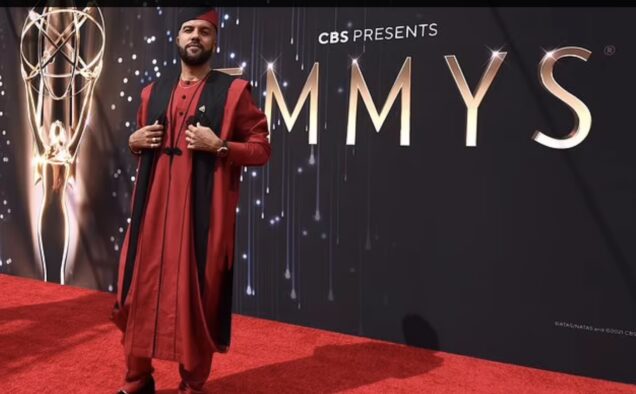 O-T Fagbenle wows in this Yoruba attire designed by Sofisticat

O-T Fagbenle, the actor son of Nigerian veteran journalist Tunde Fagbenle stood out in his Nigerian agbada outfit on Sunday night at the 73rd Emmy Awards in Los Angeles.

He appeared on the red carpet, looking princely in the outfit designed by Sofisticat Lagos.

The wine red agbada had accents of black at the edge, with a matching fila, in a stripe of red and black.

Olatunde Olateju Olaolorun “O-T” Fagbenle who was born 22 January 1981, is an English actor, writer, and director.

He has appeared in several films, stage, and television productions.

He made history when he became the first person to write, direct, compose, star and executive produce the opening episode of a TV series on a major US network with his show Maxxx.

He was not the only one who appeared gorgeous at the event.

As reported by AP, Michaela Jaé “Mj” Rodriguez wore vintage Versace Atelier in teal in an homage to Old Hollywood, her hair flowing down her back.

Kate Winslet, Jean Smart and Cecily Strong, went for classic black, the latter with a high slit and low plunge.