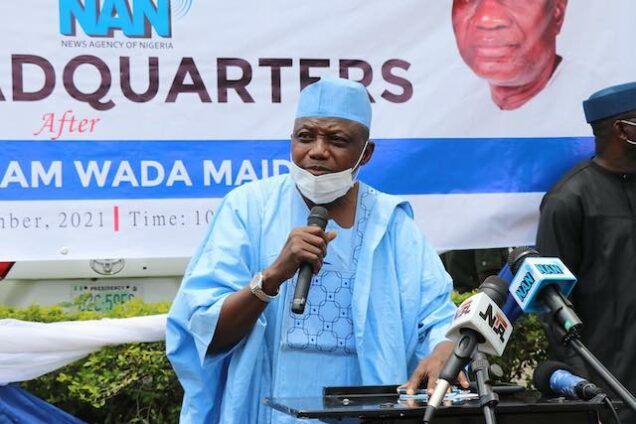 The headquarters of the News Agency of Nigeria(NAN) in Abuja was formally renamed on 16 September as Wada Maida House, a befitting honour to a veteran journalist, who worked most of his life for the agency.

Until his death on 17 August 2020, Malam Wada Abdullahi Maida, 70, was the Chairman of the NAN Board.

Before then, Wada, as he was popularly and preferably known, was Managing Director of the news agency for eight years, after working as Editor-In-Chief.

He joined NAN as pioneer staff in 1978 with eight others, following the establishment of NAN in 1976.

Wada’s career trajectory reflects the history of NAN in its 45 years of existence. For the period of his appointment as Chief Press Secretary to then military Head of State, Gen. Muhammadu Buhari in 1984, and retirement to start a private media business of consulting and publishing a newspaper, Peoples’ Daily, Wada’s image continued to loom large.

He influenced many appointments and recruitments, facilitated access to government, states and federal, and used his international network to the advantage of NAN.

To Wada’s credit, his predecessors and successors, NAN remains the most webbed media institution in Nigeria, with a reputation for accuracy and balance in reporting.

NAN has hundreds of reporters across 36 states and a metro office in Lagos, many district offices covering major towns and villages, and foreign offices.

Wada played a major role in the structuring and sustenance of the agency’s global spread to gather news to enrich the content of bulletins and increase subscribers, which include almost all media houses in Nigeria, partnerships and exchange agreements with Reuters, AFP, Xinhua Chinese News Agency, DPA of Germany, Pan African News Agency and Rossiya Segnodya of Russia.

Among some significant milestones and legacies, the former Managing Director ensured that the agency owns its operational buildings in New York, Johannesburg and Abidjan and a five-storey marble edifice in Abuja, which he supervised completion and upgrade of working tools.

President Muhammadu Buhari approved the naming of the headquarters after the former Chairman on November 26, 2020.

Conveying the approval, the Minister of Information and Culture, Lai Mohammed, said it was in recognition of the immense contributions of Wada to the growth of the agency.

“I write to convey my approval for the naming of the NAN headquarters building after the late Wada Maida, who served the agency in many capacities, including Foreign Correspondent, Editor-in-Chief and Managing Director.

“It is my sincere belief that the decision to honour the late Wada Maida is well thought out and that he deserves such a great honour, considering his immense contributions to the development of NAN,” he said.

At the ceremony, Mohammed commended management and staff of NAN for immortalizing Wada.

“Wada played a strong role in NAN. The man who built this edifice deserves to be immortalised.’’

“He believed journalism served a higher purpose for peace, harmony and development. If a country goes down everything goes down, with it,’’ Mohammed said.

“I appeal to media houses to put Nigeria first. Yes, we have challenges but this administration is working.’’

Ida disclosed that Wada was named Abdullahi Maida at birth, and only got Wada as a pet name while growing up.

The Guest of Honour and Katsina State Governor, Aminu Bello Masari, said the naming of the NAN House after Wada was well deserved, considering his contribution to the development of journalism in the country and penchant for helping others.

“You can live for 120 years in this world, but what matters is the courage you brought to life and how many people you touched. With this naming, Wada’s life will continue to the end of time.

“That’s a life worth living. He lived for others. Anytime he visited me it was because of the needs of others and his community, not for personal reasons,’’ he said.

Masari noted that the former Managing Director of NAN contributed to the emergence of many media houses, both print and broadcast, in the country, particularly in the Northern part, adding that “the whole of Katsina remains proud of his achievements and many would have made it to Abuja for the ceremony, if they were informed.’’

Senior Special Assistant to the President, Media and Publicity, Malam Garba Shehu, described Wada as “an elder brother, mentor and a facilitator.”

“He lived a life of patience & integrity. We should learn to be patient. Good things will come as we wait. Wada thought us not to rush the story; to be thorough. I recall, as editors, we will always wait for the NAN bulletin before our newspapers will go to bed.’’

The passion for reporting, editing, publishing and Public Relations saw Wada through trainings in London School of journalism, Indian Institute of Mass Communication, Aberdeen College of Technology and University of Salford, Manchester and Nigerian Institute of Journalism. He was once President of Nigerian Guild of Editors, and later became a Fellow of the guild.

He was a member of other associations like the Nigerian Union of Journalists (NUJ), Commonwealth Press Union, Amnesty International, Executive Director of International Press Institute and Chairman of Pan African News Agency (PANA) and Katsina State Broadcasting Corporation.

Wada’s contemporaries in the newsroom, who are also veterans in journalism, his mentees, some former administrators in NAN and other media houses across the country, traditional rulers and political leaders, friends and family were all at the renaming event.

The Managing Director of NAN, Mr Buki Ponle, affirmed that Wada’s leadership guided him to get a first degree and a Master’s degree while working and the former pioneer staff also encouraged him to get a Ph.D, if he wanted.

Ponle said the agency had suffered financial hardship over some years, forcing it to scale down some operations and dream projects for expansion, while thanking Wada’s vision for the progress recorded.

Wada’s family led by his wife, Hajiya Amina and son, Dr Aminu Maida, joined in unveiling the signage, and received a plaque from Governor Masari.

Aminu, witty, reticent and unassuming like his father, thanked President Buhari and the Federal Government for the honour done to his father, telling everyone that the entire family remains grateful to NAN.

“NAN will continue to be part of our family, and we will always be part of NAN,’’ he said.

Like the Wada Maida House in Central Area, the former Managing Director of NAN continues to stand tall in our memory and a physical structure.

*Egwa, is a Senior Editor, News Agency of Nigeria (NAN) and Chief Information Officer, Office of the Special Adviser to the President on Media and Publicity.