Buhari supporters in New York hired or Nigerians? Be the judge [Photos & Video] 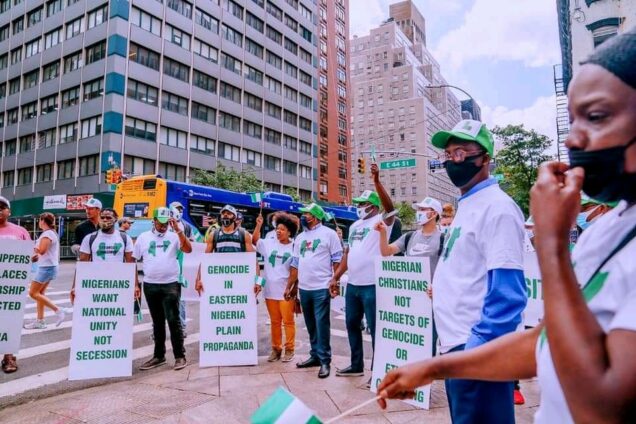 Are these Nigerians or African Americans?

Assumed supporters of President Muhammadu Buhari in New York have been on the streets demonstrating in his support.

Some of them congregated near Nigerian House on 42nd Street, 2nd Avenue, as other anti-Buhari Nigerians also protested on Monday.

But some Nigerians believe the crowd of pro-Buhari supporters were hired for a fee and that they were mostly African Americans.

Nothing is proven yet.

But the messages they bear on their placards contradict domestic perception of the Buhari regime by its critics.

Some of the messages read: Genocide in eastern Nigeria plain propaganda; Nigerian Christians not targets of genocide; Nigerians want national unity not secession.

You be the judge yourself using these photos and video shared in social media.

President Muhammadu Buhari Administration has paid some people [mostly African American $50. per hour for two or three hours a day to campaign for one Nigeria daily till he returns back to the Nigeria], in order to frustrate the efforts of the Yoruba Nations agitators at the UN🇺🇳 pic.twitter.com/5I27FRl1Ao

Separatist agitators who demand a referendum have promised to embarrass President Buhari with protest on 24 September when he is expected to deliver his address at the 76th Session of the UN General Assembly.