Tanzania-based herder, 2 others jailed for love scam in Ilorin 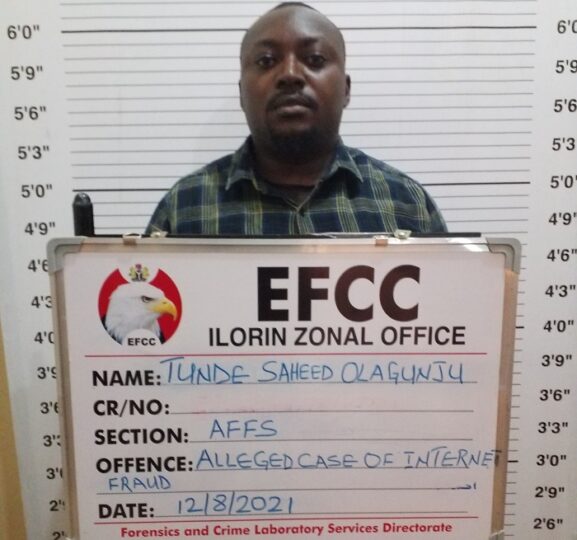 Justice Sikiru Oyinloye of the Kwara State High Court sitting in Ilorin has sentenced a 33-year-old Tanzania-based herder Tunde Olagunju and two others to various jail terms for love scam and cybercrime offences.

The two other convicts are Hassan Gafar Olarewaju, 29, and an Ilorin based bricklayer, Ojo Basit Adewale.

The Ilorin Zonal Command of the Economic and Financial Crimes Commission (EFCC), on Monday, September 20, 2021, arraigned the trio on separate charges, to which they pleaded guilty.

Following the plea of guilt entered by the defendants, Aliyu Adebayo who prosecuted for the EFCC in the case against Tunde urged the court to convict and sentence the defendant based on his admittance of guilt and the evidence before it.

In the same vein, Andrew Akoja who represented the Commission in the case against Hassan and Ojo, asked the court to take judicial notice of the guilty plea entered by the defendants as well as the evidence tendered against them in sentencing them.

In his judgment on the cases on Monday, Justice Oyinloye said that he had carefully considered the facts and circumstances of the matter, most especially the charges, the plea of guilt entered by the defendants, evidence tendered without objection and the confessional statements of the defendants.

Justice Oyinloye sentenced Tunde to two years imprisonment with an option of fine of N650,000 (Six Hundred and Fifty Thousand Naira) and ordered that the sum of $1,500 (One Thousand Five Hundred United States Dollars) which he benefited from the crime, as well as, the iPhone used to perpetrate the crime be forfeited to the Federal Government.

According to the judge, the custodial sentences would run concurrently, “but if the convict prefers the option of fine, he shall pay the fine on both counts”.

The court also ordered the forfeiture of Ojo’s Silver-coloured Toyota Camry Car 2009 Model with registration number LSR 431 GV, which he acquired with the proceed of unlawful activities, Gold iPhone 12 pro and $200 (Two Hundred United States Dollars) which he benefited from the crime to the federal government.

In a similar fashion, Hassan was sentenced to one-year imprisonment with an option of a fine of N300,000 (Three Hundred Thousand Naira).

The convict would, in addition, forfeit the iPhone XR recovered from him at the point of arrest to the Federal Government.