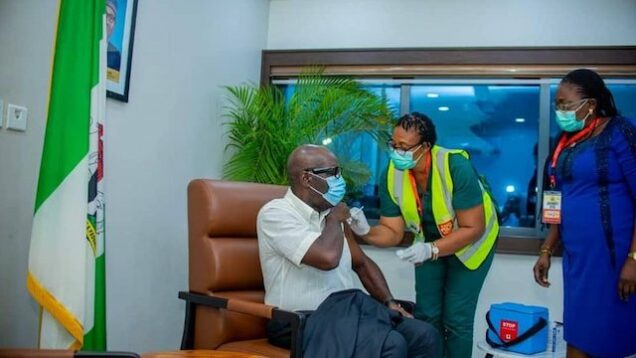 Obaseki wants everyone vaccinated against COVID-19

NGOs and residents in Edo on Wednesday kicked against the state government’s enforcement of its “No COVID-19 vaccination, no entry into government offices and other public places’’ order.

Edo government carried out its threat on Sept. 13 to stop civil servants and other citizens without proof of vaccination into public institutions.

It has continued to enforce the order and stopped residents from gaining access to some public places.

Representatives of NGOs who spoke with NAN in Benin said it was not right to force people to get vaccinated.

Dr Jude Obasanmi, Chief Responsibility Officer of Josemaria Escriva Foundation, an NGO which advocates for health, education and good governance, said vaccination against COVID-19 should not be imposed on people.

“Government is trying to see to a minimal spread of the virus in the state by way of enforcing vaccination, but available vaccines can’t go round the more than four million people in the state.

“Government is now depriving people from doing their legitimate businesses in government agencies and ministries.

“Government’s action is not proper and right because you can’t force people to take what they don’t want into their bodies.

“Rather, you appeal to their consciences on the benefit to get the jab through continuous education.

“Continuous education should be carried out rather than banning people from entering public places.

“There are so many controversies surrounding the vaccine and people are scared to take it; government should first try to debunk the myths about the vaccines,’’ he said.

Obasanmi noted that compelling people to take the jab had led to faking of the vaccination cards in the state.

“People who don’t want to take the jab are now opting for fake cards so they can gain access into government offices.

In her contribution, Ms Annie Umoru, Coordinator, Initiative for Gender Equality and Advancement, urged residents of the state to stand up for their rights and unanimously kick against forceful vaccination.

“Forcing people to take substances they don’t want into their bodies is a breach of human right.

“What the government can do is to sensitise people on the need to take the vaccine and not to impose it on people.

“It is very wrong for people to be asked to show their vaccination cards before gaining access to a place.

“People should be able to choose what they want and what they don’t want.

“People who don’t want to take the jab should speak out in unison because they have the right to do so,’’ she said.

“Some persons are still sceptical about the long-term effect of the vaccine and are scared of taking the jab.

“There is also a lot of information out there making people to reject the vaccine.

“The action of Edo government to force vaccination on its citizens is not the best because the process that has followed the response to the vaccination in different parts of the country does not warrant forced vaccination.

“People need to voluntarily turn up for the jabs and should not be forced to take them.

“The recent action by the Edo government to deny people access to public places is not the best way to go,’’ he said.

NAN reports that in Auchi, headquarters of Estako West Local Government Area of Edo North senatorial district, mixed reactions have continued to trail the restriction order with majority of the residents opposed to it.

While some residents, who spoke on the development, faulted the order, some others have complied.

A resident, Mr Aliu Ahmid, said that taking the Covid-19 vaccination should be a matter of choice.

“I have declined taking the Covid-19 vaccine because it is a matter of choice.

“The state government cannot force it on residents of the state,’’ he stressed.

Mr Innocent Oyenbuchi said the government lacked the power to force vaccines on residents, and added that it was not a surprise that the matter was now a subject of litigation.

“A court of competent jurisdiction has restrained the state government from enforcing the `no-vaccination-no access to public facilities’ order.

“This idea of compulsory vaccination should be put on hold pending the determination of the matter in court,’’ he stressed.

A respondent on the side of the government, Mr Sule Ahmed, however, told NAN that he had complied with the directive to be vaccinated.

“I have taken the vaccine and I have been complying with all recommended safety guidelines,’’ he said.

Similarly, Mr Isah Muhammed, who showed his vaccination card to NAN, urged residents to take the vaccine to protect themselves, their, families and people around them.