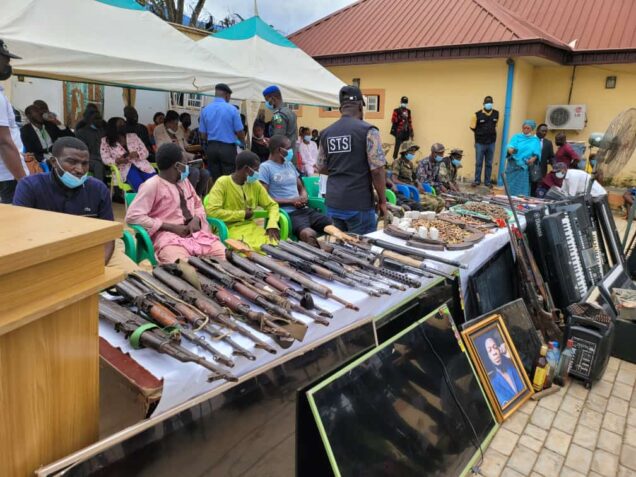 Some of the suspects with the dangerous weapons recovered

The Nigeria Police Force says its men have arrested 50 notorious criminal suspects with assorted rifles and 2,720 ammunition of different calibre.

The suspects were paraded on Thursday in Abuja.

Force Public Relations Officer, CP Frank Mba said the notorious criminal suspects were arrested for their involvement in different crimes, including kidnapping, banditry, unlawful possession of firearms, trading in illicit drugs, among others.

“Twenty-six (26) sophisticated firearms, including 13 AK47 rifles, 4 SMGs, 4 locally made revolver rifles and 2,720 ammunition of different calibre are some of the exhibits recovered from the suspects.

“Notable among the cases is the arrest of three (3) of the key suspects involved in the abduction of students of Bethel Baptist High School, Maraban Damishi, Kaduna, by operatives of the Special Tactical Squad (STS).

“The suspects are Ishaku Lawal, Muazu Abubakar and Adam Bello. Investigations by the Police team revealed how Muazu Abubakar a.k.a Datti ‘m’ 27years, the principal suspect, carried out surveillance of the Bethel school and strategized with his other gang members before they attacked and abducted the students.

“Ishaku Lawal who was also arrested in connection with the incident, revealed how Ahmadu a.k.a Yellow provided the firearms and ammunition they used for the operation. One AK47 rifle was recovered from each of the suspects. Investigations into the case is still ongoing,” he said.

Mba said also arrested, is a prolific highway robbery syndicate that have been linked to about 50 armed robberies along major highways in the South-West region of the country.

“The leader of the gang, one Mohammed Mode a.k.a Basullube from Gugu in Kwara State, revealed to the Police team how he masterminded and led other gang members, Abdullahi Mohammed from Ogbomoso, Oyo State; Musa Adamu from Otte Vilage, Kwara State and Abdullahi Ali from Orita Gambari in Oyo State, all within age bracket of 21 – 27 years, to carry out the series of highway robberies before their eventual arrest,” he stated.

Mba added that police investigations into the recent spate of break-ins and theft in places of worship in the Federal Capital Territory and other contiguous States to the FCT, led to the arrest of three members of a gang that specialized in theft of musical instruments from churches.

“The suspects revealed to the Police team how they broke into over 50 churches. The suspects include one Monday Akawu ‘m’ 39yrs who impersonates personnel of the Nigerian Army to enable the gang move the stolen items to their intended criminal receivers and Joseph Orazulike ‘m’ 35yrs who is a receiver of the stolen items. Over thirty (30) specialized musical equipment and other electronic gadgets stolen from different churches were recovered from the suspects,” he disclosed.

Mba said the IGP, while appreciating citizens for their support, which no doubt has ensured the successes recorded in the fight against crimes and criminality in the country, reiterated that the force would intensify efforts toward improving public safety and security in the country.

“All the suspects will be charged to court on completion of investigations,” he said.