Among the pyramids of Egypt: Travelogue by Wale Okediran 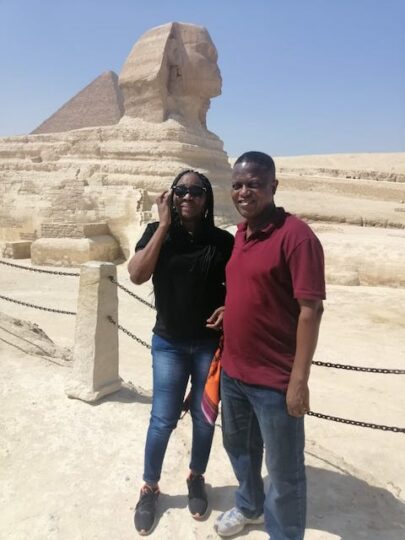 Wale Okediran and his wife Folake on holiday in Egypt

Within 24 hours of arriving in Egypt on holidays, my wife and I were already at the Giza Plateau area of Cairo admiring the awe –inspiring relics of what is considered, the world’s mightiest ancient civilisation.

These are the breathtaking works of the Pharaohs such as the massive stone hulks of the Pyramids and Sphinx as well as the giant columns and statues at the Temple of Karnack.

So impressive were the magnificent buildings that you will wonder whether such great works of art could really be the work of mere mortals or whether they were in fact inspired by supernatural or superhuman beings.

Despite the midday heat, more tourists, largely from Europe, China and the US continued to pour into Giza.

Although Memphis was the first capital of Ancient Egypt, Giza was five thousand years ago, the royal necropolis, or burial place for the capital city. Giza’s three pyramids and the Sphinx were constructed in the fourth dynasty of Egypt’s Old Kingdom, arguably the first great civilisation on earth.

Most of the pyramids found near Cairo, numbering well over 100 in total, were built during this period when Memphis was the most important city in Egypt and most probably the world.

Egypt has one of the longest histories of any country, tracing its heritage along the Nile Delta back to the 6th–4th millennia BCE.

Considered a cradle of civilization, Egypt saw some of the earliest developments of writing, agriculture, urbanization, organized religion and central government. Iconic monuments such as the Giza Necropolis and its Great Sphinx, as well the ruins of Memphis, Thebes, Karnak, and the Valley of the Kings, reflect this legacy and remain a significant focus of scientific and popular interest.

The Great Pyramids remain a challenge to Egyptologists and the inspiration of a hundred theories.

There are three main pyramids at Giza, each with its outcrop of satellite pyramids where the queens of the Pharaohs were interred. Pyramid building began with the 3rd dynasty when the Paraoh Zoser commissioned the architect Imhotep to build him a lasting monument of stone at Saqqara, south of Giza.

More than 80 pyramids were built at Saqqara and other sites along the Nile, but it is the larger and better preserved Pyramids of Giza that have caught and kept public attention.

Another colossal figure is The Sphinx. The monument is thought to have been commissioned by Chephren, son of Cheops.

Sculptured from a solid block of stone, it has the body of a lion and the head of a godlike man (possibly, Chepren).

It stands an awesome 20m (66ft) high. Even though the limestone rock is heavily eroded and battered over the years, it still remains a striking figure. Facing the great statue is the Valley Temple, another ageing architectural masterpiece.

The second day of our visit was devoted to the Cairo Museum where a lot of artefacts ranging from Statues of Pharaohs and their Queens as well as mummified bodies were kept.

The Egyptians believe in an eternal life after death. They also believed that the endurance of the ‘ka’ or spirit was linked to the preservation of the body, hence, their obsession with mummification.

The process which usually took about two months began by removing the brain (through the nose) and the intestines, lungs, liver and stomach which were treated and kept in separate containers called Canopic jars.

The heart believed to the seat of the mind and soul were left in place. The body was filled and covered with natron, a dehydrating agent for five weeks before removing the packing and stuffing it with clay, resin, sawdust and perfumes. The final stage was to coat it with resin and fragrant unguents, wrap it in bandages and keep it in its decorated sarcophagus.

Ancient Egyptian sculptors worked in materials including marble, limestone, pink and black granite, soapstone and alabaster as well as wood and precious metals.

Paintings on walls of tombs are highly stylised with the heads of figures but not their eyes or shoulders shown in profile.

After Cairo, we flew to Aswan, which is about one hour’s trip from Cairo where we visited the High Dam, an enduring monument to strongman Gama Abdel Nasser and the awesome Philae Temple with its Obelisk which is the largest Obelisk in northern Egypt.

It was in Aswan that we commenced the 5 day Nile Cruise on the Ship; The Radamis 2 which sailed to Kom Ombo, Edfu, Esna and finally Luxor.

We disembarked at Luxor to visit the West Bank, the Valley of the Kings, and the Temple of Queen Hatshepsut which was built by the New Kingdom in the 15th century BC.

Temple of Luxor, Luxor’s most obvious landmark is the magnificent complex of columns, statues and shinxes.

The huge number of inscriptions on temples and tombs gives archaeologists a vast body of material to work with and translation continues to this day.

Another flight from Luxor brought us back to Cairo from where we travelled by road to the beautiful sea port of Alexandria.

Our first visit in Alexandria was to the Pompey’s Pillar which was constructed in honour of Emperor Diocletian at the end of the 4th century.

From here, we visited the Qaitbay Citadel which was built on the site of the ancient Lighthouse of Alexandria (another one of the seven wonders of the world).

The Lighthouse was said to have been destroyed by earthquake in 1323. The fortress which is now a Naval Museum was built in the 15th century by Sultan Qaitbay.

Also in Alexandria was the Roman Amphitheatre with its tiers of seats and a stage with a mosaic floor.

Although discovered in 1960, the place was only opened in 2005 because of the large amount of excavation that needed to be done.

*Okediran, a medical doctor was former president of Association of Nigerian Authors(ANA) and also a former member of the House of Representatives. He is at present the  Secretary-General of the Pan-African Writers Association (PAWA).