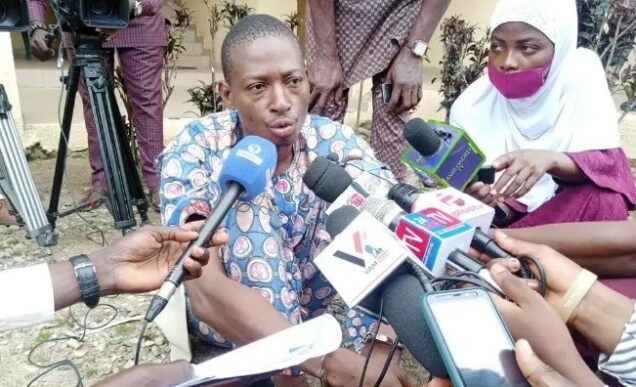 Osun State Police command has paraded five suspects linked to the recent killing of farmers in Modakeke community in the state.

They were paraded at the Headquarters of the police command on Wednesday, with weapons recovered from them, which included a double-barrel gun, five live cartridges, a knife, a cutlass and an axe.

Osun State commissioner of police, Olawale Olokode who spoke to journalists said that the killing began as a result of land and farm disputes between Modakeke and Ile-Ife.

He noted that the dispute led to the murder of two people in Modakeke which angered youths in the town and prompt them to arm themselves for revenge against Ife indigenes who they suspected to be behind the killing.

CP Olokode noted that the police intervened and peace meetings were held and an undertaking was signed to prevent any repeat of such occurrence.

Surprisingly, the police commissioner said on August 20, five men Oladele Ismaila, Oladele Afeez, Taye Animashaun, Shina and one other were going to their farmland and were attacked and killed at Alape village.

The murder angered Modakeke youths again the police chief said noting that they thought those killed were from Modakeke.

“They decided to take revenge on the Ife communities but their efforts were thwarted by the prompt intervention of the Police and other sister security agencies, he said.

“The five deceased were not from Modakeke as erroneously insinuated by the people of Modakeke.

“This ugly incident made the Police to swiftly swing into action that led to the arrest of five key suspects.

He noted that investigations are still on and security measures have been put in place to ensure the lawlessness is under control.

“The suspects will be charged to court at the completion of investigation for prosecution,” he noted.

CP Olokode also assured that the command will continue to work tirelessly to ensure the state is free from all kinds of criminal elements.