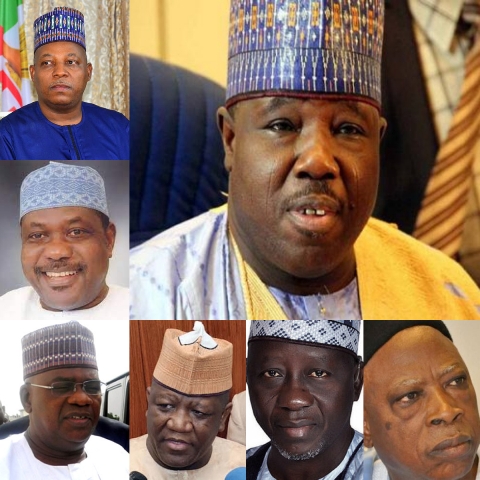 Some of the aspirants jostling for APC chairmanship seat

As the nation zealously await the 2023 dateline for the election of President Muhammodu Buhari’s successor, and others, agitations are mounting within the ruling All Progressives Congress APC, over who will emerge as its next National Chairman. Former Governors, Senators are among those jostling for the office.

The party is currently being administered by a 13-man Caretaker/Extra-Ordinary Convention Planning Committee CECPC led by Governor Mai Bala Buni of Yobe State. It was inaugurated in June last year, following the sack of former National Chairman, Adams Oshiomhole, about two years to the end of his tenure.

Although the date for the imminent elective National Convention is yet to be decided, just as its guidelines have not been released, an undercurrent has started flowing through its membership on the matter, fueling speculations on a consensus arrangement. The fact that most of its Ward and Local Government congresses were based on consensus, gives merit to the speculations.

Aspirants for top party stewardship positions have commenced consultations on how to achieve their respective dreams. No less than eleven notable figures are believed to be eyeing the chairmanship position and pulling the strings in that regard.

Stakeholders are already feeling the impact of the consultations as aspirants and their agents scavenge for support across the country. All the power blocks in the party are in auto mode activation to protect their respective interests.

The notable power units include the legacy parties that coalesced to form APC in 2013, the APC Governor’s Forum, the National Assembly Caucus of the party, former Governors, former federal lawmakers and the regional groups.
To put it mildly, all the groups are involved in the game of suspense, intrigues and horse trading on a convention that promises to be the most combustible in the party’s history.

Yet, the most important issue taming the discussions hovers on which zone will produce the Presidential candidate of the party in the next election. Promoters of an unwritten rotational arrangement between the north and south want zoning to be honoured, while those opposed to it want the contest to be thrown open to all irrespective of region of origin.

A look at the regional demography of the Chairmanship aspirants, however, shows the zoning influence. Except for the blend of one aspirant from the south, the people positioning for the position are predominantly from the north.

The former two term Governor of Nasarawa State and third term Senator is a strong defender of merit and competence as basis for sharing political positions. From 1977 when he won election into the Constituent Assembly,

Adamu has grown through the ranks in politics. He was former NPN State Secretary and Chairman. He says he will bring his wealth of experience to bear in managing the party.

The North Central zone where he hails from is in strong contention for the slot and most of his opponents are from the zone. He is of the old PDP block.

He is another former Governor of Nasarawa State and wealthy businessman with commendable foot soldiers. He belongs to the old Congress for Progressive Change, CPC which may translate to Presidential backing. He also enjoys the support of his successor Governor Abdullahi Sule.

Al-Makura is however attending to some petitions with the Economic and Financial Crimes Commission, EFCC and has a strong opponent in Adamu.

He was a former two-term Governor of banditry laden Zamfara State, which he held firmly for the party. Those agitating for zoning do not favour his northwest zone in their discussions. It is also left to be seen how the recent defection of his successor, Governor Matawalle from the PDP to APC will affect his aspiration.

Yari leaves the matter in the hands of God. He said: “If God decides that it should be, it is going to be. People can manouvre and do all sorts of calculations, but they will not prevail. All I know is that I can lead this party and they know what I can do.

He was twice Governor of Benue State and a former Minority Leader in the Senate. He is the current Minister of Special Duties and Inter Governmental Affairs.

Akume is a team player believed to have what it takes to foster unity and peace in the ruling party.

He is a political savvy with a rare talent to maneuver through difficult times. He is a former Senator and two term Governor of insurgency battered Borno State. The ease with which he made his way to the Chairmanship position of the PDP shortly after he defected to the party confounded analysts.

Largely viewed as controversial, Sheriff was member of All Nigeria People’s Party, ANPP and a foundation member of APC. He has never hidden his obsession for the party’s Chairmanship office. He has a large financial chest. He may, however, not be enjoying the support his Governor, Prof. Zulum.

He is another former two terms Governor of Borno State and a serving Senator. Although he has yet to declared his Chairmanship ambition, he enjoys the support of many members of the National Assembly and his successor, Prof. Zulum.

President Buhari holds him in high esteem due to his famed integrity, hard work and managerial acumen.

He served as Governor of Bauchi State for eight years and Minister for six years. He has declared his intention to run for the Chairmanship race. He said he reviewed his earlier decision to stay out of public view in the interest of the party and country.

“I was privileged to serve in Nigeria for six years as minister and eight as governor. I think I have served long enough in the Villa to know the dynamism in the power at the centre. If I am the dullest person, at least I still have to offer something that will be meaningful. This is why I said let me give it a shot. If I succeed, fine and good and if I don’t the Almighty Allah will not say you did not come out.”

His aspiration is making waves across the country.

The serving third term Senator was Gombe State Governor for eight years. His supporters believe he has a unique ability to bring people together. He was in contention for the Senate Presidency until he referred to Senator Ahmed Lawan, the current President.

His supremacy battle with the present Governor of his state over control of the party structure may affect his chances.

He is one of the very few aspirants who has never served as Governor or in the National Assembly. He hails from Kwara State.

The young businessman turned politician is of the old CPC block, and a founding member of the APC. Mustapha has held many party positions, including Deputy National Chairman of CPC. He says he will be a bridge builder between the old and the young.

He was born and raised in Adamawa State by parents from Delta State. He was Secretary of ACN in the FCT before the formation the mega APC. He is the first to declare his intention to succeed Oshiomhole.

“I will put every bit of my energy to institute an effective working synergy among all party structures and arms of the government, which is critical to ensuring that promises made during campaigns are not mere rhetoric but will be accelerated and fulfilled to the letter for the good of Nigeria and its citizens, as well as excellent global relations.

“My dealings as a national chairman will exhibit absolute transparency in the party’s affairs as one of its hallmarks. We will be free of any form of influence or corruption whatsoever.”

He is the Senator representing Niger East and at 54, among the youngest in the race. He enjoys support of his Governor Sani Bello.

The aspirant promised to utilise his experience in service of the party. “My experience in private and public sectors, the capacity required to manage diverse people and interests irrespective of tribe, religion and region is already imbibed by me. I am a mobilizer, a bridge-builder, and a strategist that is passionate about the wholesome development of the nation. I possess a strong interpersonal skill by demonstrating the utmost discretion and integrity in all of my dealings.”