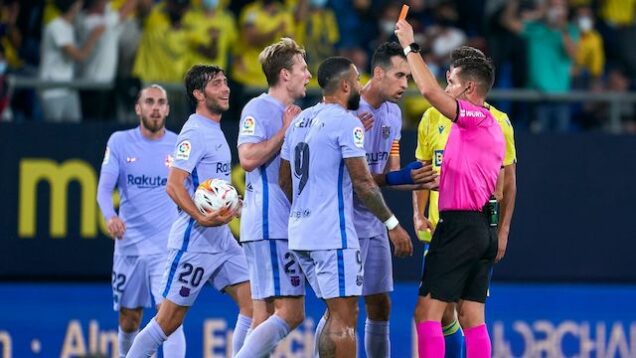 Out you go: Barcelona's Frenkie De Jong bags a red card at Cadiz

Ronald Koeman’s departure from Camp Nou became more imminent Thursday after his 10-man Barcelona side were held to a 0-0 draw by Cadiz at Estadio Nuevo Mirandilla.

The embattled coach was even dismissed in the dying seconds for dissent after Sergio Busquets had kicked a second ball that was on the pitch into an opposition player to get the game stopped.

It has been a torrid start of the season for the Catalan club, as they also dropped points to Athletic Bilbao and Granada in their opening four games.

In the champions league, they were thrashed 3-0 to Bayern Munich.

Things did not get much better for the Catalan giants in Andalusia as Cadiz comfortably kept them at bay.

Their misery was compounded midway through the second half when Frenkie de Jong saw red for two bookable offences.

Koeman was also dismissed in the closing seconds for his protests during a frantic finish.

The one point secured moved Barcelona up to seventh – seven points behind leaders Real Madrid, who have played a game more.

Their hosts Cadiz climbed to 14th.

Is Koeman’s time up?

Speaking ahead of the match, Barca president Joan Laporta insisted Koeman’s job did not depend on the outcome of the result, but he did warn that “if decisions have to be taken, we will take them”.

That decision may well be nearing after another woeful display from a Barcelona side desperately short of ideas, pace and attacking threat.

Barcelona will host Levante at Camp Nou on Sunday. Maybe they will play better and save Koeman’s job.