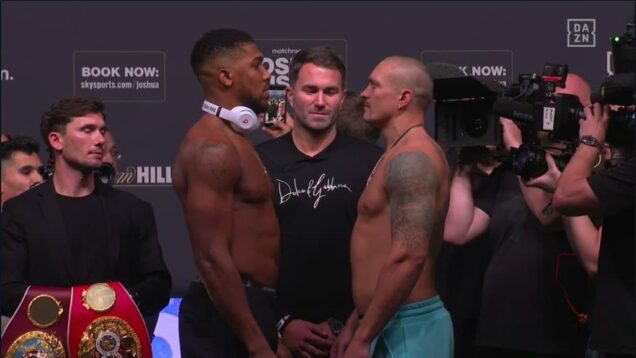 Ahead of their heavyweight match on Saturday, Anthony Joshua and Oleksandr Usyk went face to face in an intense stare-down.

The face-off followed the weigh-in and unveiling of musclebound physiques for their world heavyweight title fight.

After the face-off, they each flexed their muscles and paid tribute to each other’s physiques.

On Thursday, Anthony Joshua expressed confidence during a press conference that he would defeat Usyk on Saturday.

“You have to have a bit of aggression, boxing skill, head movement. There is not just one factor that determines a fight.

“Obviously we have our go-to – our strength. I will use my strengths,” he said.

They fight on Saturday at the Tottenham stadium with undercard action starting by 6 pm and ringwork for the main bout would begin at 10:10 pm.