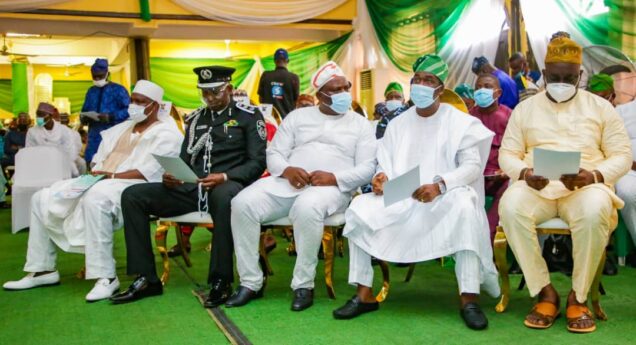 Lagos State Governor, Babajide Olusola Sanwo-Olu has called on religious leaders in the country to engage Nigerians on the importance of building strong family ties and proper child upbringing for a better nation.

Speaking on Friday at a Special Jumaat to commemorate the 61st National Independence at the Lagos State Secretariat Community Central Mosque, Alausa, the Governor who was represented by his Deputy, Dr. Kadri Obafemi Hamzat, said it is time for clerics in the country to change their sermons by dwelling on how to protect the environment, imbibe right attitude and be law abiding, among others.

According to the Governor, “It is time to change our sermons to how do we protect our environment and other positive attitudes as people listen more to their religious leaders than the governments, especially in Nigeria, as they are taken as role models”.

He noted that the religious leaders are listened to by the people than the government, urging them to use their pulpit to sensitize the citizens on family values and the need to always be their brother’s keeper. He noted that family values have been lost and must be rejigged and strengthened for national development.

While citing poor parenting as being responsible for some of the challenges and social vices in the country which has now become a threat to us as a nation, Sanwo-Olu charged parents to take proper responsibility for the upbringing and training of their children, adding that government can build roads, schools and other infrastructure but the way parent trains their children is important.

Earlier in his sermon, Dr. Saaid Ahmad admonished Nigerian leaders to rejig the system for the better and charged the youth to love one another and love the country.

He further advised that the citizens work together for the development and progress of the country and stop blaming one another.

Highlight of the event include prayers for the state, country and the leaders in general.