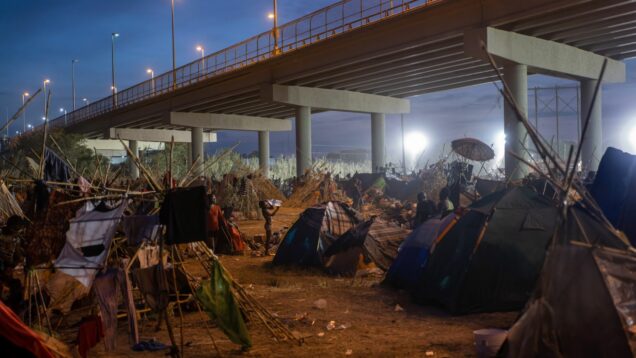 An impromptu border camp has been emptied of thousands of Haitian migrants, a county judge in Texas said on Friday.

Hundred of the migrants were sent home via deportation flights or transported to Mexico.

Val Verde County Judge Lewis Owens, who has been keeping tabs on the number of people in the camp, said only “stragglers” remained out of an estimated 15,000 people who camped on the banks of the Rio Grande bordering Mexico a week ago.

A witness said the shanty town-like jumble of makeshift shelters and tents had all but disappeared by Friday afternoon, with workers clearing the last debris.

As well as the Biden administration’s contentious use of expulsion flights that have carried at least 1,400 back to instability in Haiti, Mexico has also sought to bus and fly Haitians to its southern states, far from the U.S. border.

Thousands more are in U.S. detention centers and several hundreds have been released in Texas.

On Friday, the International Organization for Migration (IOM) formally asked Brazil to receive some of the Haitians from the camp, according to two sources with knowledge of the request. read more

Many of the Haitians arriving at the U.S. border had previously lived in Brazil and Chile, while others have transited through the South American countries.

U.S. President Joe Biden has faced strong criticism in recent days over the expulsions to Haiti, including in a sternly worded resignation letter from the U.S. Special Envoy to Haiti, Daniel Foote who said the Caribbean nation was a collapsed state.

The U.S. government in May extended temporary protection from deportation to Haitians in the United States, citing a political crisis, rights abuses, crime, and lack of access to food, water, and healthcare in the Western hemisphere’s poorest country.

Since then, Haiti’s president has been assassinated and it suffered a destructive earthquake.

Foote’s resignation followed widespread outrage stirred up by images of a U.S. border guard on horseback unfurling a whip-like cord against at Haitian migrants near their camp.