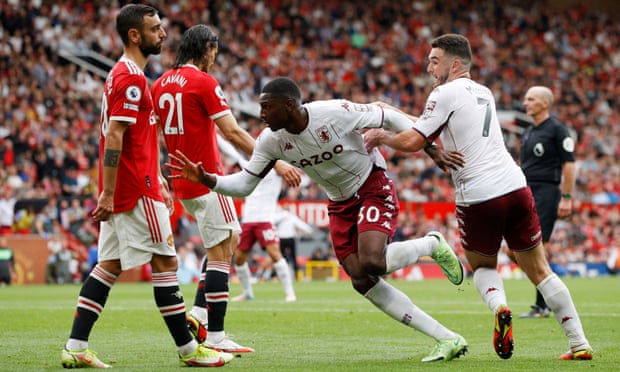 Manchester United lost their first Premier League match of the season.on Saturday as they bow to Aston Villa at Old Trafford.

Villa took the lead in the 88th minute.

The goal came from a corner as Hause beats Cavani at the near post to flick the ball past De Gea!

However, the drama continues as Manchester United were awarded but Fernandes kicked the ball miles away from the bar.

It was the usually so-reliable Fernandes who won the penalty when his delivery was handled by Kortney Hause, Mike Dean giving the kick after giving the call due consideration.

However. when the final whistle went Hause, making a first league start of the season, ended as the hero not zero.

Manchester United may rue this afternoon when the title reckoning is made.

Aston Villa were good – in attack and defence – and motor home with three points to be proud of but Solskjær’s team created more and had the clearer chances.

Mason Greenwood can be disappointed after he decorated the first half, in particular, with cunning and menace but lacked a cool eye before Emiliano Martínez’s goal.

It was a team-wide problem: a glittering forward line of Greenwood, Paul Pogba, Fernandes and Cristiano Ronaldo could not kill their visitors off with the latter, as the centre-forward, too isolated.

United, then, lose their unbeaten Premier League record, record a first blank of the campaign and end with both Luke Shaw and Harry Maguire limping off.

At the final whistle, Villa saluted their fans, who sang: “Deano, Deano, Deano!” for Dean Wilson, their adored manager who should long and quite understandably remember this day.