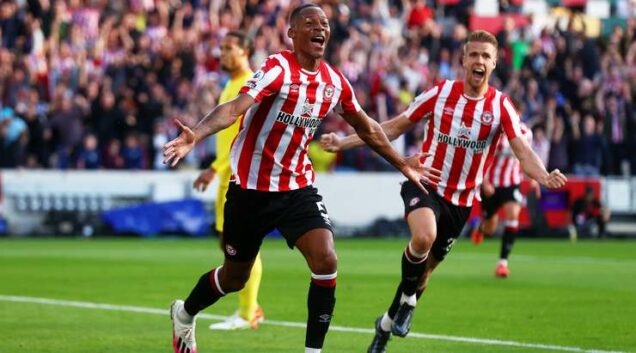 Newly promoted side, Brentford on Saturday scored a late goal to draw with Liverpool in a six-goal thriller at home.

Yoane Wissa’s late goal was enough to see Brentford snatch a point in a sensational affair as the ‘Reds’ extended their unbeaten Premier League run to sixteen.

Liverpool were heading for a win when Wissa hits the equaliser for Brentford on 82 minutes to make it 3-3.

It was no surprise to see Liverpool fly out of the traps against Brentford and Mo Salah threatened an early opener, but his mazy individual run bore no fruit and seemed to kick-start the hosts into action.

According to Flash Score, Brentord stunned the ‘Reds’ shortly before the half-hour mark, when a well worked ‘Bees’ free-kick resulted in Ethan Pinnock converting Ivan Toney’s cross as bedlam ensued at the Brentford Community Stadium.

The joy was short-lived, after Jordan Henderson whipped an inch-perfect cross onto the head of Diogo Jota who nodded home just four minutes later.

Jota’s came close to doubling his tally, after following up on Curtis Jones’ deflected effort, but a sensational David Raya save ensured the scores were level at half time.

The Brentford stopper was powerless ten minutes after the break as Mo Salah netted his 100th Premier League goal for the ‘Reds’, as he took the ball on the run and volleyed home to fire Liverpool into the lead for the first time on the night.

Brentford weren’t deterred by Liverpool taking the lead, and hit back from Vitaly Janelt’s close-range effort after Pontus Jansson’s original effort came crashing back off the bar. A topsy-turvy game was to have another twist in the tale, as Jones collected the ball in the channel, stepped inside and bent a teasing effort beyond the grasps of Raya.

Wissa was to have the final say on proceedings, as he capitalised on penalty box pinball, to lift the ball over Alisson Becker.

A share of the spoils ensures Brentford avoid back to back home league defeats for the first time since December 2018, whilst for Liverpool, they miss the chance to go three points clear at the top of the Premier League.