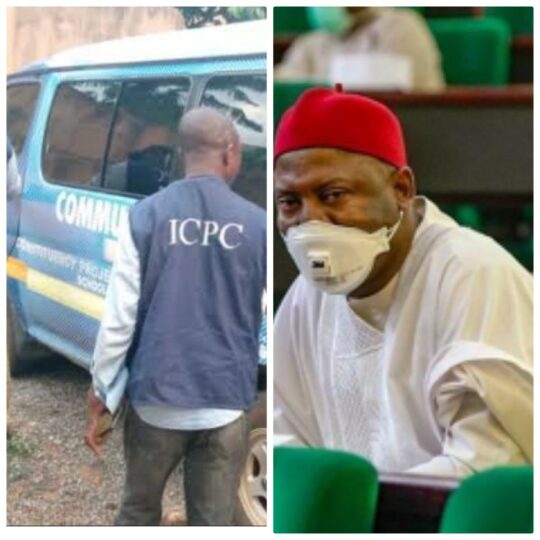 By Chimezie Anaso/News Agency of Nigeria

The ICPC made the discovery during the ongoing Constituency and Executive Projects Tracking Exercise in Anambra state.

The anti-graft agency said the items meant for youths and women in Oyi/Ayamelum Federal Constituency were concealed in a warehouse belonging to the lawmaker.

The items which were bought in 2019 and 2020 included grinding machines, sewing machines, driers, clippers, among others.

The ICPC officials, who visited the constituency for checks, confirmed that the listed beneficiaries had not received the items, and all efforts to access the warehouse were frustrated by the lawmaker’s agents.

The officers, who pleaded anonymity, said they were denied access to the warehouse after three attempts due to the reluctance on the part of the lawmaker`s team to take them to the facility.

“We have the list of the intended beneficiaries but those we called said they did not receive the items,” the source said.

The ICPC team also said nobody was around to show them the evidence of the rural electrification project awarded through PRODA.

However, in Ogbaru Federal Constituency, the anti-graft agents said they were able to verify installed and functional solar-powered streetlights in Okpoko and Umunankwo.

In Orumba North and South, the ICPC officials also verified the donation of an18 seater-bus to a community in Akpu as approved for the lawmaker in 2019.

In the Anambra North Senatorial Zone, the ICPC officials were able to interact with some market women who got training and start-up capital of N80,000 each.

The women attested that the money helped them to expand their various businesses which yielded income for their families.

Still, in Anambra North, the ICPC officials confirmed that some youth were trained on ICT and got N20,000 each as transport fare.

Only one of the beneficiaries said he got a computer set and a printer, while none of the 22 trainees was paid the N120,000 that was approved in the bill of quantity.

Tricycles were said to have been distributed to youths but the ICPC officials said no single beneficiary could be produced as evidence of having executed the project.

The ICPC is currently on the third phase of the tracking exercise in which 18 states will be covered.

Mrs. Azuka Ogugua, the commission’s spokesperson, had stated that a total of 1,251 projects, comprising 1,024 constituencies and 227 executive projects executed under the 2019 and 2020 appropriations, had been listed for tracking.