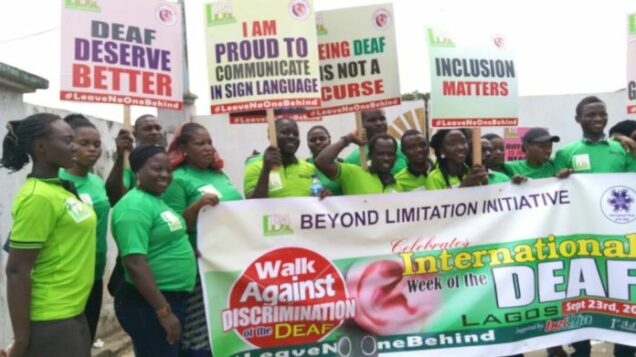 Some Persons with Disabilities (PWDs), have called for increased media publicity, using simple and appropriate terminologies, as well as, improved access to public amenities and services for members.

The group made the call at a media training on Deaf Inclusive Reporting on Friday, in Abuja.

It was organised by the Deaf Women Aloud Initiative, (DWAI), in partnership with Marie Stopes Nigeria, Rule of Law and Anti-Corruption (RoLAC), and the EU funded programme implemented by the British Council.

The training was part of events to commemorate the International Week of the deaf people and Sign Language.

The group decried the discrimination and exclusion of the deaf community and People with Disabilities (PWDs), in Nigeria, stressing the need to include them in national issues and ensure the protection of their fundamental human rights.

Executive Director, DWAI, Mrs. Hellen Beyioku-Alase, said people with hearing or speaking loss and other forms of disability, were normal human beings and would like to be treated and seen as such without any form of stigmatisation, discrimination or use of insensitive terms to describe or communicate with them.

Beyioku-Alase said PWDs often felt left out and disrespected by the public because they were highly misunderstood due to communication barriers and the use of derogatory terms to describe them.

According to her, people often forget that PWDs are human beings with disabilities, but not without humanity and feelings.

“This workshop will highlight the importance of embracing and recognising deaf culture, as well as inclusive service delivery for the deaf community.

“It also plans to challenge the perception of the deaf in Nigeria and to also promote the positive aspect of the deaf through greater accessibility and publicity using the media.

“We are holding this workshop for media personnel with special focus on deaf inclusive reporting that is aimed at amplifying the collective voice of deaf people’s voice in Nigeria, in accordance with the UN Convention on the Rights of Persons With Disabilities status,” she said.

Beyioku-Alase said: “The international week of the deaf is an initiative of the World Federation of the Deaf, (WFD), and it was first launched in 1958 in Rome.

According to her, the UN General Assembly has proclaimed Sept. 23 and 24, as the International Day for Sign languages to raise public awareness on the method of communication and its importance to the promotion of fundamental human rights.”

Martha Aga, of the DWAI, also noted that most news organisations, especially the electronic media, often excluded the deaf community in their reportage, by not using sign language interpreters.

“The deaf community was totally excluded from the COVID-19 reportage, and because they were unaware of what was happening, fell victims of brutality by security men during the lockdown.

She urged media organisations to also use friendly terminologies in their reportage because effective and efficient communication was important to the deaf.

“The use of facial expressions, gestures, unusual sounds, large characters and fonts in captioning headlines, and the use of terms like hard hearing instead of deaf and dumb, visually impaired instead of blind and deafblind among others.

“Please use friendly terminologies and be friendly with us, talk to us and explain things to us,” she pleaded.

Similarly, Mr Beyioku-Alase, a Deaf community member, stressed the need for the public to understand basic sign language and facial expressions, and be treated as normal human beings.

Beyioku-Alase also called for the mainstreaming of the rights of deaf people in the media, and the society in general, as well as make sign language a subject of study in Nigerian schools.