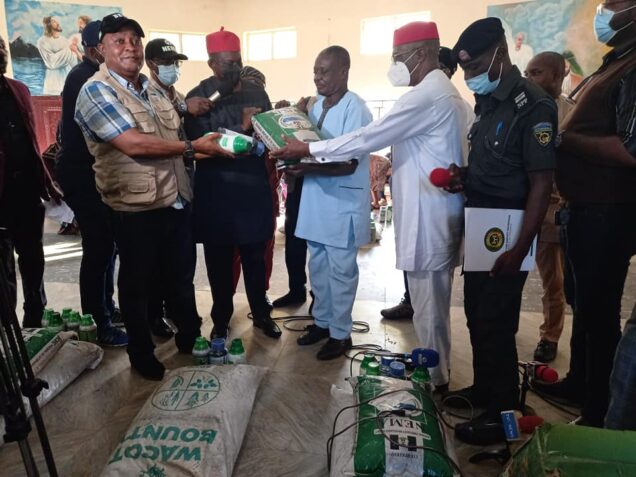 The Federal Government (FG), has begun distribution of farm inputs under the Emergency Agricultural Intervention Programme, to aid 1,911 Imo farmers, affected by the 2020 flood disaster.

The Director-General (D-G) of the National Emergency Management Agency (NEMA), Mr Mustapha Ahmed, who commenced the distribution ceremony on Saturday in Owerri, said the initiative was part of the Federal Government’s support programme to farmers affected by the flood.

Ahmed, represented by the Director, Disaster Risk Reduction, Mr Vincent Owan, said 1,911 farmers, affected by the 2020 flood in Imo, had been verified and scheduled to benefit from the Agricultural Input Intervention.

“You will recall that during the 2020 Flood Disaster, NEMA deployed personnel to the affected areas, including other communities in the state, to undertake assessment of damage and loss.

“Report from that assessment was utilised by the federal and state governments to guide short term humanitarian interventions, while at the same time serving as long term recovery plan,” he said.

The D-G listed other items to include 637 quantities of 10kg maize seedling, 32 water pumping machines, 318 spraying machines, as well as 1,274 bags of fertilisers.

He said the FG was committed to prioritising agriculture and giving support to small scale farmers.

Ahmed said Nigeria was no longer interested in the importation of foods and now keying into the Green Revolution initiative of President Muhammadu Buhari.

Uzodinma, represented by the Deputy Governor, Placid Njoku, appealed to the FG to sustain the programme to enable victims of natural disasters to overcome the trauma.

He said the Imo government was doing a lot in the state to checkmate flooding and other natural disasters through the construction of drainage systems and quality roads.

Some of the beneficiaries told the News Agency of Nigeria (NAN), that the items would enable them to get back on their feet and return to farming.

Anyanwu said: “Today is my happiest day because I thought that the flood incident was the end of my life.
“I lost everything in my farm to flood disaster in 2020, but today, the government has come to my rescue,” she said.