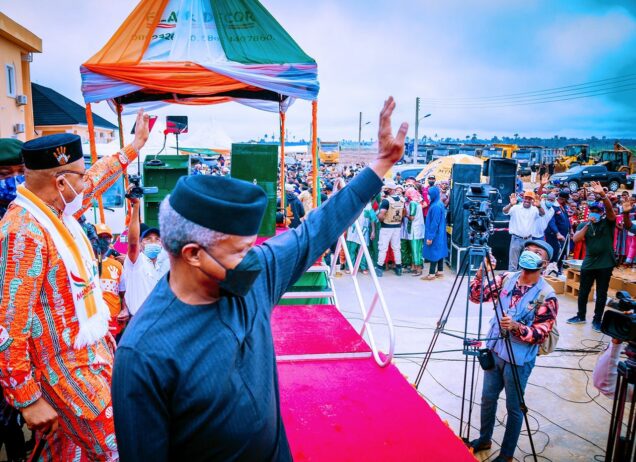 Having spent about N8.9 Trillion, a record sum, on infrastructure and capital alone since its inception, the Buhari administration is encouraging State governments in the country to follow suit.

Such spending on infrastructural development would not only help position the States to become major industrial hubs but also yield multiplier economic benefits, while at the same time attracting more investors from around the world, according to Vice President Yemi Osinbajo, SAN.

Prof. Osinbajo stated this on Friday in Uyo, the Akwa Ibom State capital, where he flagged off the construction of a housing estate and commissioned the Dakkada Tower as part of activities marking the 34th Anniversary of the State’s creation.

Akwa Ibom State Governor Udom Emmanuel received the Vice President at the airport, alongside other dignitaries, including the former Governors of Cross River and Benue States: Mr. Donald Duke and Senator Gabriel Suswam. Others top government officials at the events included members of the National Assembly, top State government officials, including the Akwa Ibom State Deputy Governor, Mr. Moses Ekpo, the Special Adviser to the President on Economic Affairs, Dr. Adeyemi Dipeolu, and the Senior Special Assistant to the President on Niger Delta, Senator Ita Enang, among others.

Bringing with him to the State the warm felicitations of President Muhammadu Buhari to the Governor, the government and people of the State, the Vice President stated that the President “asked that I specially congratulate you, Mr. Governor, and the good people of Akwa Ibom State on the 34th Anniversary of this great State.”

The Vice President observed that the focus of the Akwa Ibom State government on infrastructure development is significantly in sync with the centrepiece of the Federal Government’s economic agenda.

“As you are aware, since the inception of our administration Mr. President has prioritised the development of infrastructure: roads, rail, power and broadband; and despite the severe economic headwinds we have experienced in the past six years, we have invested more than any other administration in infrastructure,” the VP asserted.

He disclosed that “as of last year, we had expended over N7.6 Trillion on infrastructure alone (and about N8.9 Trillion on the entire capital expenditure).”

Prof. Osinbajo stated further that “just last month, the Federal Executive Council approved the Lagos Calabar rail project, which will pass through Uyo as a major station, and at the end of last year, FEC also approved the full business case for the Ibom deep sea port.  These infrastructural developments are set to establish Akwa Ibom as a major industrial hub, not just in Nigeria, but in the West African sub region.”

He highlighted Governor Emmanuel Udom’s industrialization agenda for the State, noting that, “when I was here in 2019, we commissioned the Kings Flour mills, Lions Plywood and Timber Factory and the power substation. Since then, you have done far more and you have even launched an airline, Ibom Air, which has become the gold standard nationally for promptness and efficient service.”

Prof. Osinbajo then commended the State government for “consistently reinventing itself to remain competitive and attractive to the investment community.”

On building infrastructure to serve the populace, the VP noted that the Buhari administration’s mass social housing programme under its Economic Sustainability Plan is one aspect of how the Federal Government is investing in infrastructure to create jobs and unlock capital for individual and corporate prosperity.

He then stated that the Ibom Luxury Estate, the new Akwa Ibom housing estate (the construction of which was flagged off today) is also strategic as investors from around the world and management of industry and businesses that will be attracted to the State will want good world class accommodation.

“They will want a safe environment to raise their families; the Ibom Luxury Estate is the answer to that need,” Prof. Osinbajo noted.

Generally, he stated that “there are also, of course, the multiplier economic benefits of housing projects. Housing projects create several direct and indirect jobs, and frankly, aside from the provision of decent shelter, it really is an important job creator. So, this project will provide several jobs during and post-construction, coupled with property taxation, which will form additional streams of revenue for the State’s coffers.

“Which is why as part of our Economic Sustainability Plan, we have our mass social housing programme. This is part of our jobs for houses programme, which is run by the Family Homes Fund, where we intend to build 300,000 housing units across the country. We intend to use local materials, builders and artisans in every State.

“I am pleased to note that Akwa Ibom State has keyed into this important programme and has already made land available. And it is called the Dakkada Affordable Housing. It is surely the way to unlock capital for individual and corporate prosperity, but it requires executive and legislative collaboration to ensure its success.”

Prof. Osinbajo urged “the State House of Assembly to continue to work with the Executive to make all land administrative processes friendly, seamless and swift. This will revolutionize your real estate sector and unlock more investment opportunities for Akwa Ibom.”

In the same vein, while speaking at the commissioning of the Dakkada Tower, which is regarded as among the tallest buildings in Nigeria, Prof. Osinbajo recalled that Governor Udom had shared his administration’s vision to construct the tallest building in the South South and South East Region in the State.

“Today, I am filled with joy to witness the realisation of the dream as we gather to celebrate a commitment to excellence and vision as represented by the 21-storey edifice before us,” the VP enthused.

“The completion of the Dakkada Tower will most definitely address the paucity of world-class office accommodation for both local, corporate and international companies, especially oil and gas companies. With this development, the big players in corporate Nigeria, and especially in the oil and gas industry, should now find it entirely auspicious to relocate their administrative headquarters to Uyo.”

The Vice President further noted that the tower is a state-of-the-art smart building, combining architectural beauty with the latest technology developed for smart and efficient workspaces.

Earlier, Governor Udom Emmanuel thanked the Vice President for honouring the invitation of the State Government, describing him as “the pride of Nigeria” and “our brother, our teacher, our pastor, our mentor.”

The Governor further said the State is investor friendly and “we are spearheading innovations that will generate revenue and create jobs and will put us on the world map.”

He said the Dakkada Estate’s water system meets the WHO standard, has a separate power turbine system, four avenues, safe city security system and many other amenities.

He added the Dakkada Tower was in response to the federal government’s call that oil companies operating in the oil producing States should establish corporate offices in the state of their operations.