Inside Buhari's eventful days at UN, the assignment from Guterres 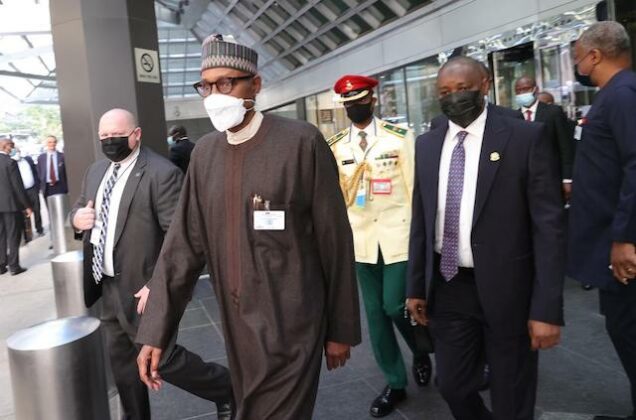 Buhari at the UN on Friday

President Muhammadu Buhari on Saturday left New York for Abuja, after the conclusion of an eventful outing at the 76th Session high-level meetings of the UN General Assembly.

The UN Correspondent of the News Agency of Nigeria (NAN) reports that President Buhari on Friday addressed the world leaders.

He spoke on the leadership role of Nigeria in stabilising West-Africa and tackling the scourge of terrorism in the sub-region.

He also talked on COVID-19 and the contributions of Nigeria to contain the pandemic and appealed for debt cancellation for countries mostly affected by the pandemic.

The Nigerian President also raised an alarm over the unconstitutional takeover of power in West Africa, among other global issues.

After delivering Nigeria’s statement to the world leaders, President Buhari subsequently had a meeting with the UN Secretary-General, António Guterres.

During the meeting, the UN scribe urged the Nigerian leader to use his position to stabilise the West African sub-region.

The Nigerian leader had participated in many bilateral meetings with a number of leaders of other countries’ delegations and heads of international development organisations.

President Buhari, who arrived in New York for the annual gathering of world leaders, attended the opening of the General Debates on Tuesday.

On the same day, he held a bilateral meeting with President Evariste Ndayishimiye of Burundi.

He also met with the Director-General of World Trade Organisation, Ngozi Okonjo-Iweala, and attended the UN Food Systems Summit, where he restated Nigeria’s commitment to food security.

The President, on Wednesday, participated at the hybrid “High-Level event”, tagged Transformative Actions for Nature and People.

The Nigerian leader also held a bilateral meeting with United Nations Secretary-General’s Advocate for Inclusive Finance for Development and Queen of The Netherlands, Her Majesty, Maxima Zorreguieta.

Buhari subsequently had bilateral meetings with the Permanent Representative of the United States to the UN Amb. Linda Thomas-Greenfield and the Prime Minister of The Netherlands, Mark Rutte.

NAN reports that the Nigerian delegation participated in other high-level events such as the High-Level Dialogue on Energy.

The events also attended by President Buhari included the Commemoration of the 20th Anniversary of the Adoption of the Durban Declaration and Programme of Action on Reparations, Racial Justice and Equality for People of African Descent.

The delegation also attended the High-Level Level Plenary Meeting to commemorate and promote the International Day for the Total Elimination of Nuclear Weapons, among others.

The First Lady, Aisha Buhari, organised a side event with the First Lady of The Gambia, Fatoumatu Bah-Barrow, under the auspices of the African First Ladies’ Peace Mission (AFLPM) on the margins of the General Assembly.

The event, at which Aisha was represented by the Special Assistant to the President on AFLPM, had as its theme: “Accelerating Women, Peace and Security in Africa within the SDGs Agenda.”

The General Debates, which started on Tuesday, Sept. 21 with the theme: “Building Resilience Through Hope – To Recover from COVID-19, Rebuild Sustainably, Respond to the Needs of the Planet, Respect the Rights of People and Revitalise the United Nation,’’ is expected to end on Monday, Sept. 27.

Due to the global pandemic, the size of delegations allowed into the General Assembly Hall was highly restricted.

Leaders from more than 80 countries spoke in-persons at the UN General Assembly, while other world leaders spoke through pre-recorded video messages.

Nigeria has been a member of the UN since 1961 and has been participating in various General Assembly activities since then.

The UN General Assembly is the most representative and most visible organ of the United Nations where all the 193-member states have equal representation.

The Assembly is also one of the six principal organs of the UN, the main deliberative and policy-making organ of the United Nations.

Its powers are to oversee the budget of the UN, appoint the non-permanent members to the Security Council and appoint the Secretary-General of the UN.

It also receives reports from other parts of the UN and make recommendations in the form of Resolutions, as well as establish numerous subsidiary organs.