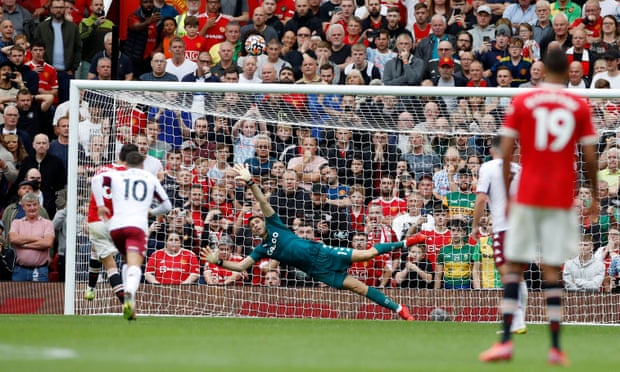 The penalty came after Kortney Hause headed the visitors ahead on 88 minutes with a brilliant stooping header from Douglas Luiz’s near-post corner.

United did get a chance to salvage a late point after Hause handballed Bruno Fernandes’ cross. But Fernandes stepped up and fired over the bar to give Villa their first win over United in the Premier League since December 12, 2009.

However, Solskjaer isn’t happy with the way Villa players crowded around Fernandes beforehand.

He also believes Hause’s goal should have been disallowed.

Solskjaer bemoaned the late winner and said: “Obviously disappointed because the goal is offside. It’s unfortunate to have that decision against you.

On Fernandes’ missed penalty he said: “First of all the way they get round the penalty spot, get round Bruno and that, that’s not to my liking. Bruno is usually very good in those positions and unfortunately, he missed this one.

“It doesn’t get in Bruno’s head. He’s strong mentally and he’ll step forward again. The decision (on who takes penalties) is made before the game.”

On three defeats in last four games in league and cup: “When you lose games it’s a concern of course it is.”

Speaking about the injuries to Luke Shaw and Harry Maguire, he added: “At the moment they don’t look ok for Wednesday but let’s see.”

However, Match-winner Hause said he knew as soon as he headed the ball it was in.

“As soon as it touched my head I knew it was in and hearing the fans scream topped it off.”

“When they gave the penalty I was devastated and fuming with myself. Looking back I didn’t make myself any bigger. I’ve tried to bring my arms in so when Bruno blazed it over the bar I was relieved. I think it was justice in the end because I don’t think it was a penalty,” he told the BBC.