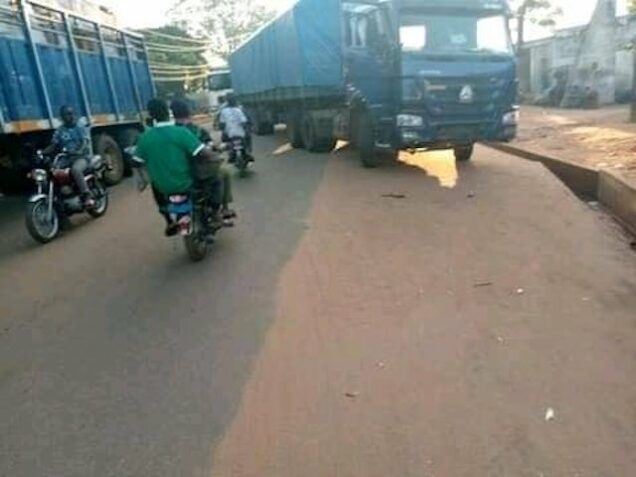 Many motorists and commuters plying the Bida-Minna, Bida-Lambata and Bida- Mokwa federal roads were stranded Friday as truckers blocked the roads.

The drivers are protesting what they described as the poor condition of the roads.

Vehicles have not been allowed into Bida from Minna or Lambata-Agie- Bida road, in the last twenty-four hours, because of the blockade.

The protesters have also blocked the Gurara Bridge to prevent motorists from coming in and going out of the state capital, Minna.

The stranded motorists lamented that the protesters blocked the Gurara Bridge between Lambata and Izom since in the afternoon, preventing vehicles from moving in and out of Minna.

Abubakar Musa, a resident of Bida town, told NAN in a telephone interview that many commercial vehicles from Lagos and other states were stranded in Bida, due to the blockade.

Musa said that it had been tough for road users and residents of Bida over the action of the truck drivers.

” The action has affected business activities while some school children could not access their schools.

” Worthy of mention is also the threat posed by some of the fuel- laden trucks, especially with few individuals seen smoking around the scene, “ he said.

” The protesting drivers said that being a major link between the South and the North, the route is left with only one alternative, which is the already dilapidated Bida- Agie-Lambata road.

“They claimed that for days now, it has become difficult to navigate as its condition has worsened,” he said.

Alhaji Ahmed Ibrahim, a commuter, said:” I have been stranded for almost twenty hours in Bida, on my way to Minna from Lagos.

” I can’t move since yesterday, so also a lot of commercial drivers and their passengers.

Commissioner for Works, Malam Mamman Musa, said the request by truck drivers to use Minna-Bida road would not be granted.

Musa, however, said that palliative works would be done on the Bida – Lambata route to make it motorable.

Hajiya Maryam Mustapha, a Minna resident, commended the efforts of the state government in the ongoing reconstruction of Minna-Bida Road.

” I commend the commitment of the state government for not allowing heavy trucks to be plying Minna- Bida road to enable the contractors handling the project to do quality work.

“The decision of the state government to prevent heavy trucks plying Minna-Bida Road, is the best thing as it has reduced road crashes.

The Controller, Federal Ministry of Works and Housing in the State,Mr Iheanacho Ume , told NAN that work on Lambata – Agie- Bida was stopped because of the rainfall, but that it would resume after the rainy season.

The Commissioner of Police in the State,Mr Monday Kuryas, said the police would ensure that law and order prevailed in the area.

Similarly,Mr Mohammed Musa, FRSC sector commander in the State, said personnel of the corps were on ground to ensure smooth movement of vehicles.