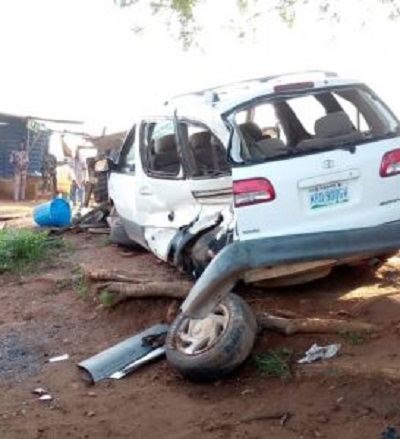 The Toyota Sienna car involved in the accident

Two persons were killed on Saturday when a Toyota Sienna car rammed into some commuters on the Lagos-Abeokuta Highway.

Seven other persons sustained varying degrees of injuries in the accident.

“The accident was caused by excessive speeding and loss of control on the part of the Toyota Sienna driver,’’ he said.

The TRACE spokesman noted that the accident involved 10 persons; five of them male.

“According to an eyewitness report, the Toyota Sienna driver was on top speed and in the driver’s attempt to avoid a ditch, he lost control and ran into commuters waiting by the roadside to board a bus to their destinations.

“In the process, two persons died, a minor (whose mother survived the accident) and an old man, while seven other commuters were injured, with one person escaping unhurt.

“The driver of the Toyota Sienna has been arrested and taken to Itori Divisional Police Station with the vehicles involved in the crash,’’ Akinbiyi said.

He added that the injured were taken to nearby General Hospital, Ifo, while the deceased were deposited at the morgue of the same hospital.

Akinbiyi admonished drivers to avoid excessive speeding and advised traders to stop displaying their wares on the roadside while commuters should always stand at designated bus stops to board vehicles to their destinations.