All hail Lai Mohammed the Kakakin Kebbi of Argungu 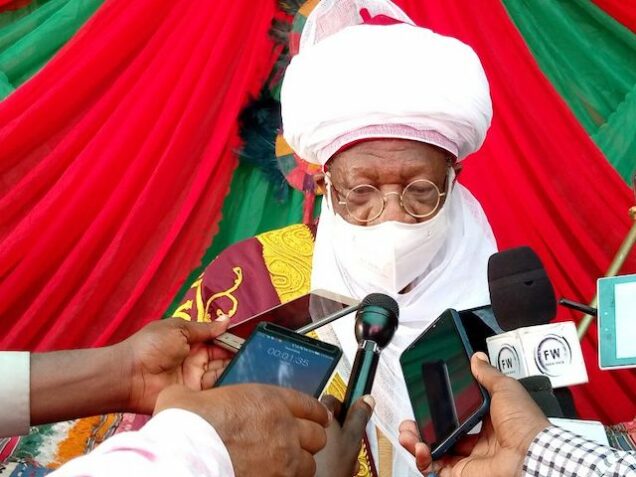 Minister of Information and Culture, Alhaji Lai Mohammed, has been honoured with the chieftaincy title of Kakakin Kebbi, by the Emir of Argungu, Alhaji Sama’ila Muhammad-Mera.

Alhaji Suleiman Argungu, Chief of Staff to Gov. Atiku Bagudu of Kebbi State, described the turbaning of Mohammed as a symbol of national unity.

Lai Mohammed, Yoruba from Kwara state, was turbaned Sunday at the forecourt of the Palace of the Emir in Argungu town.

The event was on the sideline of the 2021 World Tourism Day to be celebrated in Birnin-Kebbi on Monday.

The Emir said the title was conferred on the minister because of his “courage and strength of character in projecting the image of Nigeria locally and internationally”.

Specifically, the Emir said the emirate honoured the minister with the title as a show of appreciation for his effort in promoting the Argungu Fishing and Cultural Festival to attain international status.

Chief of Staff Argungu spoke at a reception organised in honour of the Minister in Argungu.

“Kakakin” is an instrument that attracts attention to announce the presence of the King and to convey authority of the King on all messages transmitted to the population on behalf of the King.

The bearer of this tittle, “Kakakn Kebbi” is now the spokesperson or image maker of Argungu Kingdom of Kebbi State.

The Chief of Staff observed that the turbaning was timely in view of the fact that some unpatriotic citizens were busy trying to inflict a sense of disaffection, acrimony and disunity among Nigerians.

“The turbaning is apt, because it will go a long way in fostering unity among Nigerians, especially at this critical time that some unpatriotic elements are busy trying to bring confusion and split the country into pieces.

“Nigeria has been in existence for many decades and it will continue to be so, unity of this nation is for the good of all of us.

“With the likes of Lai Mohammed, Nigeria will continue to be a one indivisible nation because in his position as a Minister, he considers himself as a Minister of the Federal Republic of Nigeria not for Yoruba or the state he comes from.

“This is the kind of people we want, not those who will inculcate disunity amongst us and that’s why he visited many states of the federation to promote different indigenous culture of our people and in essence to promote unity,” he said.

He appealed to all Nigerians to accommodate and tolerate one another to facilitate brotherliness, love, understanding and unity for the good of all.

Alhaji Lai Mohammed thanked the Emir for finding him worthy of the title and promised to ensure that the festivals in Kebbi State will be transformed not only to national but also international status.

He sought the collaboration of the entire people of Argungu Emirate and Kebbi State in general to do much more in promoting the famous Argungu International Fishing and Cultural Festival.