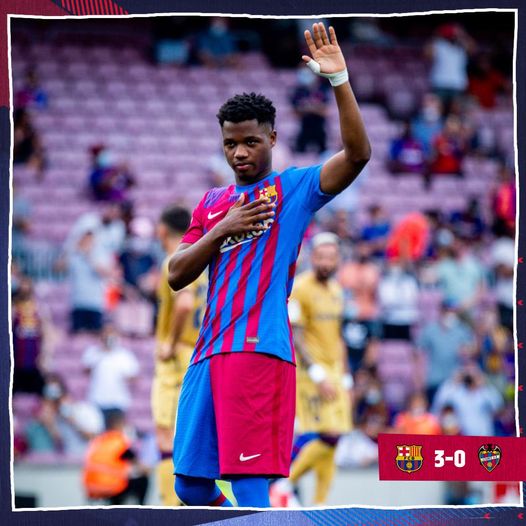 Barcelona were back to winning ways on Sunday and will finish the weekend in the Top 5 of the La Liga table thanks to an excellent 3-0 victory over Levante at Camp Nou.

However, the biggest part of the match was when Ansu Fati scored on his return in one of the most unforgettable moments in recent Barça history.

To the surprise of everyone watching, Barcelona were quite simply outstanding in the first half. They scored two goals early, with Memphis Depay winning and scoring a penalty and Luuk De Jong getting his first for the club after a brilliant buildup play from the back, but the team continued to attack and create chances throughout the period.

The midfield was superb, with Gavi and Nico González shining with their play on the ball and hunger to press the opposition and regain possession, and Sergio Busquets had one of his best halves in months. Óscar Mingueza and Sergiño Dest were constant threats from the full-back positions, and the team was really good defensively as well.

Barça could have easily scored four of five if not for Aitor Fernández in the Levante goal, and the feelings were extremely positive going into halftime. Could the home team sustain the pressure and score more in the second half?

The home team didn’t slow down: Barça continued to dominate possession and look to score more in the second half, with Memphis especially hungry to add more to his tally and being a tad too selfish at times.

Riqui Puig came on early in the period and sparkled as usual, but the moment Barcelona fans all waited for came with 10 minutes to go when Ansu Fati returned.

Fati was instantly a threat, running at defenders with his speed and skill and even earning himself a penalty which was somehow ignored by both the referee and VAR despite the new number 10 being clearly tackled. But Ansu was not done: in the first minute of added time, he fired a rocket from just outside the box and found the bottom corner.

Camp Nou exploded, his parents cried in the stands, and the entire team celebrated with Barça’s new Number 10.

The final whistle came to end a perfect day for Barça, and maybe, just maybe, it’s the start of many other good days.