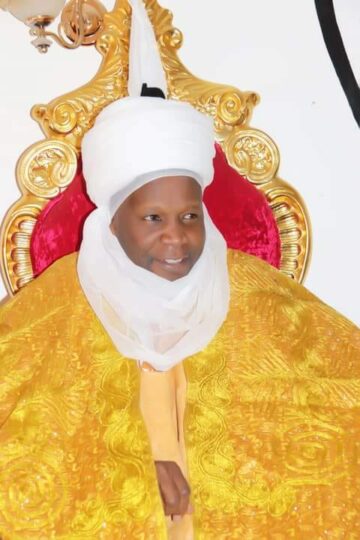 The message was conveyed to the Governor by a high powered delegation, led by former Governor of Bauchi State Alhaji Ahmed Adamu Mu’azu in the company of other prominent personalities from Gombe and other states.

In an interview with the press shortly after the brief ceremony, Governor Yahaya said the title of Dan Maje conferred on him by the Emir of Gombe and Chairman, Gombe State Council of Emirs and Chiefs will be a morale booster for him to do more for the people of Gombe State.

“I want to use this medium to thank His Royal Highness, the Emir of Gombe, Dr Abubakar Shehu Abubakar III and his council members for finding me worthy of this very important and prestigious title; this honour will surely spur me to do more in delivering good governance to Gombe state”.

Earlier in his remarks, the leader of the delegation and former Governor of Bauchi state, Alhaji Ahmed Adamu Mu’azu, who spoke on the long-standing relationship between Gombe and the Bauchi States, noted that the two are like twins, adding that his coming to lead the delegation at the instance of the Emir of Gombe, further buttressed this fact.

He also informed the Governor that the title conferred on him by the Emir was in recognition of his administration’s tremendous achievements in various sectors of the economy within a span of two years and few months in office.

He urged him to continue in that direction, even as he commended the Emir for recognizing and rewarding hard work.

In his remarks, one of the key members of the delegation and former Director-General of Pension Commission of Nigeria, PenCom, Malam Muhammad Kabir Ahmad, attributed the conferment of the chieftaincy title to Governor Inuwa Yahaya to the age-long relationship between Gombe Emirate and Umaru Tsoho family, the Governor’s family coupled with his sterling performance and commitment to service delivery in Gombe state.

He particularly noted with delight, the Governor’s superlative and unprecedented achievements in areas of road construction, education, healthcare and governance in general among other sectors.

“The governor is the type that listens to advice from all of us and always keeps his doors open for us, and I must say with the unprecedented achievements recorded by his administration within this short period of time and his determination to do even more, the conferment of this is quite deserving and an inspiration to do more”, MK Ahmad noted.

Announcing the title, the Sallaman Gombe, Alhaji Usman Adamu, said after series of consultations, His Royal Highness, Dr Abubakar Shehu Abubakar sent the delegation of eminent personalities and key Emirate Council members to formally convey and pronounce the title of DAN MAJE of Gombe conferred on the Governor.

Speaking on behalf of the family of Alhaji Umaru Tsoho, Alhaji Bello Umaru Tsoho, a retired Director with the Nigerian Deposit Insurance Corporation (NDIC), thanked Gombe Emirate Council for finding their brother worthy of the title of Dan Maje.

He believes that the honour may not be unconnected with the age-long relationship since the life of the late Abdullahi Dabo Dankoli, their great grand father and renowned merchant in the ancient Gombe.

He said: “What Umaru Tsoho family has witnessed today is a testimony that history has yielded fruitful results and provided another opportunity to renew and solidify their enviable ties with the royal family.

The event, held at the premises of the Governor’s personal residence in G.R.A Gombe, was graced by members of the Governor’s family, former Governor of Bauchi, M.A Abubakar, Sen. Saidu Ahmed Alkali, Speaker and members of Gombe State House of Assembly, Chief of Staff, Abubakar Inuwa Kari, Commissioners, other Government functionaries, party elders, members of business community among others.