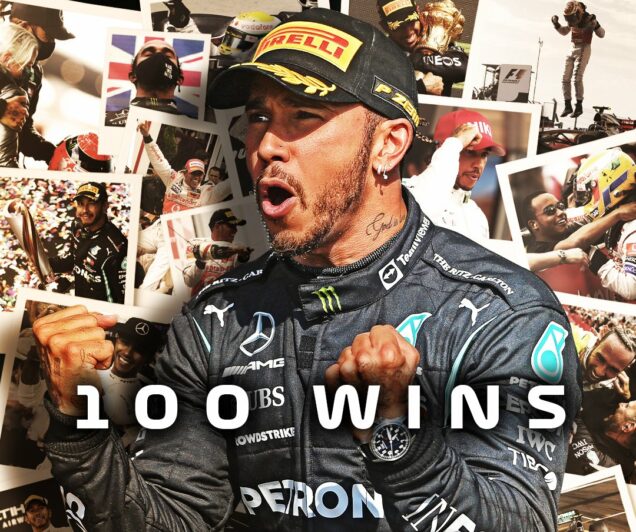 Lewis Hamilton made it a double celebration on Sunday, winning the Russian Grand Prix at Sochi and at the same winning a record 100th Formula One Grand Prix.

In treacherous rain the seven-time world champion reached the unprecedented century in his Mercedes.

He has been stuck on 99 since the British Grand Prix in July.

His victory on Sunday was rain-assisted, with Red Bull’s Verstappen finishing an impressive second after starting 20th, due to engine penalties.

Verstappen’s impressive race limited the damage from his rival’s win.

Hamilton is now two points clear of Verstappen with seven races remaining, after starting fourth on the grid and five points behind the young Dutchman.

Spaniard Carlos Sainz was third for Ferrari on a day of heartbreak for McLaren’s Lando Norris, who led three laps from the end but decided to stay out on slicks as the rain began to fall and ended up seventh.

“What a race the weather provided. It’s taken a long time to get to 100 and I wasn’t sure it would come,” said Hamilton, who last season passed Ferrari great Michael Schumacher’s previous record of 91 wins.

“Max must’ve done a really great job to come up to second from last. We’ve got our work cut out,” added the Briton.

Hamilton had pitted from second place for intermediates with four laps to go and it was the right decision as Norris, on pole for the first time in his career and heading for a first win, found out to his dismay.

The 21-year-old Briton slid and slithered on the treacherous surface as Hamilton made up the 25-second gap and seized the lead.

“The team made a great call right at the end. I didn’t want to let Lando go and I didn’t know what the weather was doing,” said Hamilton.

“It would’ve been tough to get past Lando unless we came up to some traffic or he made a mistake, which he hasn’t been doing, so then the rain came and it was very opportunistic.”

While Hamilton celebrated a personal century, his Mercedes team maintained their own 100% record in Sochi.

The champions have won every Russian grand prix since the first in 2014, Hamilton triumphant in five of them.

Australian Daniel Ricciardo, winner of the previous race at Italy’s Monza circuit, was fourth for McLaren, with Valtteri Bottas fifth for Mercedes after starting 16th.