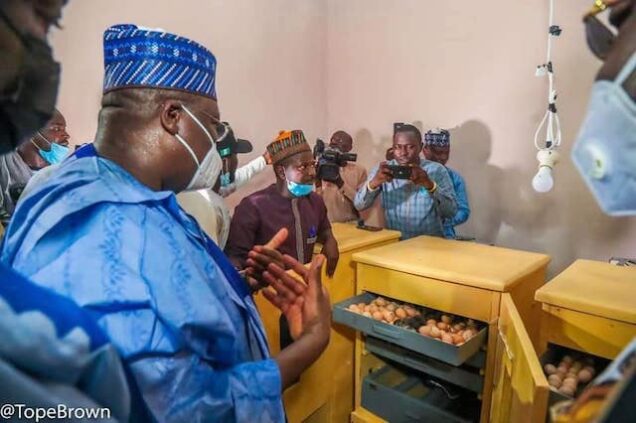 Lawan at the bird farm in Gashua Yobe

This project was initiated by the National Agricultural Lands Development Authority (NALDA) under the Presidential Integrated Farms Estate.

At the launch on Saturday, Lawan lauded the initiative, while lamenting Nigeria’s over-dependency on oil as a bad omen for the country’s economy.

He said: ” Investments in livestock production, fisheries and poultry are important means of diversification of the economy, which should be welcomed and encouraged by all well-meaning Nigerians.”

In his remarks, Mr Paul Ikonne, NALDA’s Executive Secretary, said over 250,000 eggs would be produced at the farm annually.

Ikonne said part of the Authority’s mandate was to revive agriculture, which constituted the mainstay of Nigeria’s economy before the advent of oil.

The Executive Secretary said: ” Reviving agriculture would scale up agribusiness for food sufficiency and to minimize the desperation for white-collar jobs.”

Governor Mai Mala Buni, represented by the Secretary to the state government, Alhaji Baba Wali, thanked the Federal Government for siting the project in the state.

He gave an assurance to NALDA that the farm would be properly maintained to bring succour to the people of the area.