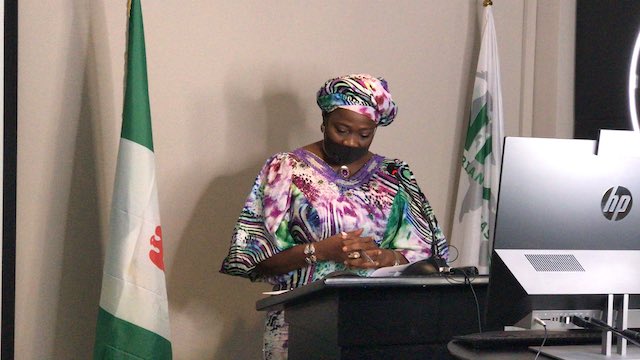 The Chairperson of the Nigerians in Diaspora Commission, Abike Dabiri-Erewa, has sent a message of encouragement to Anthony Joshua after the Nigerian-British boxer was defeated by Ukraine’s Oleksandr Usyk.

Dabiri-Erewa took to her Instagram page and kept it short and simple.

Joshua, who fought Usyk in front of a raucous 68,000 crowd at Tottenham Hotspur Stadium, also lost his IBF, WBA, WBO heavyweight titles to the Ukrainian.

While narrating how Usyk beat him, Anthony Joshua said he saw nothing in the ninth round.

“I couldn’t see in the ninth round. I couldn’t see anything really. But it was a good experience because in adversity you just gotta learn to control yourself. Stay on top of things.

“We’ll be back 100 (percent). I’m ready to get back to training. Because of the twelve rounds, my lungs and everything, it was a good twelve-rounder so I’ll be in a good place when I get back into training to pick up where we left off.

“He’s got good pace but he still gets hit, you know? He gets hit a lot and in the rematch, we’ll just learn how to hit him more and be more concussive with our punch selection.