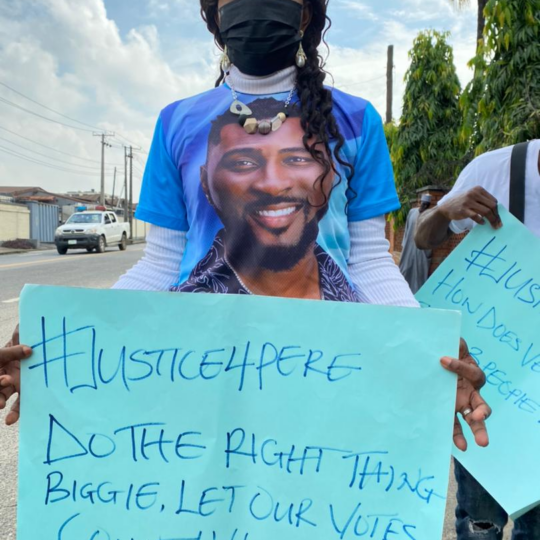 Fans of Big Brother Naija Shine Ya Eye housemate, Pere, have stormed the streets of Illupeju in Lagos State, to protest against the organisers of the TV reality show.

The protest was against the introduction of a twist by Biggie to make Pere and Angel battle for a spot as a finalist in the show.

The duo was isolated in a ‘white room’ in the BBNaija house and had to battle their way back into the show through a game of ‘trucks and screwdrivers.’

Biggie introduced the twist after Pere had clearly defeated Angel by vote.

However, the fans of Pere want the organizers to reverse the decision by sending their fave to the finals.

The protesters branded shirts and placards that read, “#Justice for Pere’ Do the right thing, Biggie, let our votes count, amongst other messages.

One of the protesters said, “If you don’t want him, release him to us. Why the mental stress?”